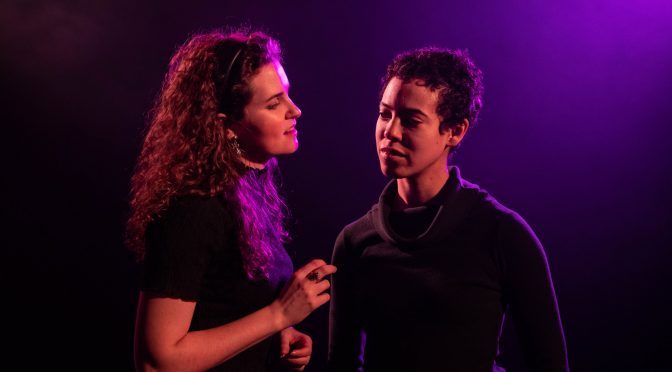 While historical dramas aren’t to all tastes, Virginia Woolf and Vita Sackville-West make good subjects. The genius writer and her poetess-garden-designing lover are a biographer’s dream. Yet mixing their story with a tale of modern dating sounds tricky to me, a clear case of taking on too much and trying too hard to be relevant. Which goes to show you how wrong I can be… V & V proves to be a double treat that’s not to be missed.

The show is a quadruple achievement as two actors perform four roles flawlessly. EM Williams and Heather Wilkins are superb as the famous Bloomsbury couple and, in the present day, Lottie and Mia. Switches in time and parallels in the stories are dealt with impeccably by Misha Pinnington whose direction, like her writing of the play, is clear, concise and entertaining.

The epistolary form reveals the course of the two relationships with intensity, creating an intimate complicity with the audience. The beautiful letters between Woolf and Sackville-West are compared to online courting to great effect. Williams and Wilkins smoulder with Edwardian sexual repression one minute and show themselves superb comedians the next. Pinnington’s use of the letters shows her skill at editing – the material is wonderful. Meanwhile, the texted conversations turn into great crowd pleasers: from sexting and ghosting to deliberation over kisses and exclamation marks. The energy, and jokes, are great, while it’s fascinating to see how communication, and romance, has both changed and stayed the same.

V & V isn’t all light. Everybody knows how Virginia’s story ended (she must be one of the famous of suicides), while Lottie and Mia face problems, too. If I’d have liked Pinnington to provide a more overtly optimistic end for her contemporary character it only goes to show how attached I became to them; the restraint (OK, maybe realism) shown provides an emotional conclusion that packs a punch.

Pinnington’s skill is to show both differences and similarities between the couples so effortlessly. There’s no trace of period kitsch (zero trug count) or modern stereotypes. Four different women, all well delineated, and two very different periods in time are depicted with a light touch, while the common theme of love is explored with both humour and sensitivity. It all adds up to one great show.