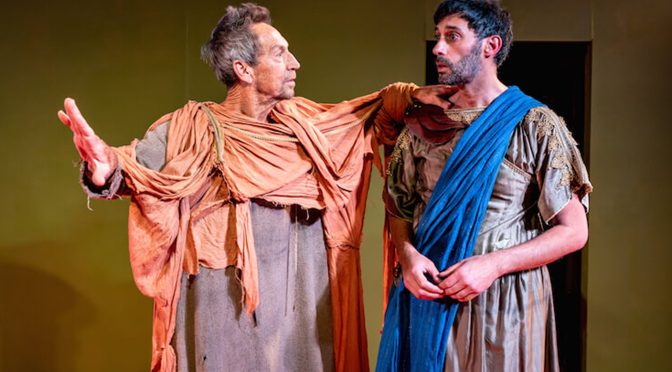 Well done to the wag who decided the sign for the toilets should be in both Greek and English at this première of Howard Brenton’s new piece. The bilingualism is indicative of the show’s playfulness and learning – a combination that makes the evening more fun than you might expect.

If you like philosophy in your plays, telling the story of Socrates’ last days is a sure-fire winner. There’s a lot of debate, all of it interesting, and director Tom Littler treats the arguments with swift efficiency. Clarity is appropriate and essential when bringing so much discussion to the stage, and Littler has done a great job.

Socrates’ engagement with future philosophy (more later on how literal this is) provides strong moments for William Reynolds’ lighting design. But, I confess, I found the show increasingly hard work. You’ll spot references to Descartes and Kant and, I think, Deleuze (but don’t hold me to that).

What impresses more is that the constant questioning is given a camp appeal. That Socrates, depicted expertly by Jonathan Hyde, is such a pleasant, genial figure to watch is balanced by the potential threat he poses – combining sincerity with mischievous. It isn’t hard to see why some felt threatened by his famous, continual probing. “But” is said to be a ”lethal” word – and Socrates says it a lot.

When it comes to the famous death, the play lacks an emotional appeal. Again, you could argue that’s appropriate. There is a fine performance from Robert Mountford, who appears as the jailer after having served as Euthyphro, whose eponymous dialogue forms the first scene. The temptation to find contemporary connections, not surprising given the play’s title, pick up pace but raise smiles rather than convince.

The real highlight in Cancelling Socrates comes with Brenton’s focus on women. The characters of Xanthippe (Socrates wife) and Aspasia (who it is suggested was his mistress) make fine roles for Hannah Morrish and Sophie Ward. Both characters feel freer of cliché and fully rounded despite (yet again) presenting two sides to an argument. The scene of them “quarrelling over how to live” is great drama.

The women’s roles take us to the core of an exploration of mysticism and religion within the play, which is a keen reminder of ritual and magic in Ancient Greek culture. Discussion of Socrates “demon” comes with the voice that drives him to argue – the thing that sees him “testing everything to destruction”. This isn’t just a metaphor, but a stage presence, lending some much-needed theatricality to the show. To cram so much into a short piece, with a mostly light touch, is a magical achievement.