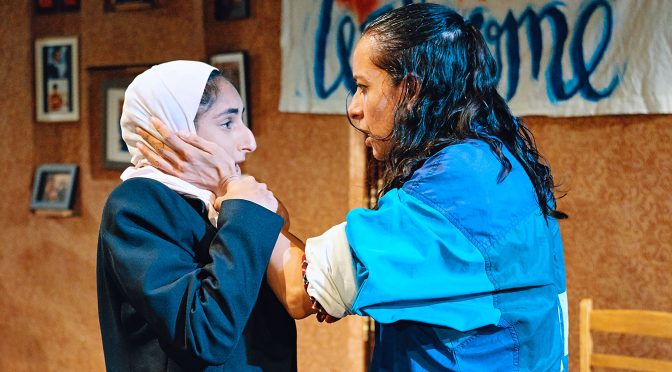 Six months and 40 shows into 2022, Ambreen Razia’s new play is the best thing I’ve seen so far. A deceptively simple story about three generations of one family, the script is hilariously funny and deeply moving. Four unforgettable characters are brilliantly realised by a talented cast.

First up for praise – Favour has a decent plot. Beginning with Aleena’s release from prison, we want to know why she is late? What has happened to her mother, Noor, and daughter, Leila, while she has been away? And why was she in prison? Family secrets and feelings are revealed with skill under the careful direction of Róisín McBrinn and Sophie Dillon Moniram. It isn’t all doom and gloom either – there’s a magical fantasy scene for Aleena and Leila with “sugar and TV allowed” that is winning. As for why we care so much – the answer comes with Razia’s excellent characters.

With Aleena, Avita Jay portrays a mercurial woman with mental health and addiction problems who is both dangerous and inspirational. The role of Noor is taken by Renu Brindle, who shows us a figure of fraught dignity gradually transforming. The youngest character Leila is exceptionally well written with a mix of smart remarks and naivety that is wry and emotional. Ashna Rabheru, who takes the part, is fantastic, especially in scenes that show the character suffering from anxiety.

There’s a fourth character too – Fozia, played by Rina Fatania – a busybody whose barbed comments get the audience howling with laughter. Fatania provides brilliant comedy though Fozia is more than a clown (note her departure from the stage).

Presenting different ages could be a clumsy shortcut for conflict.  But Razia is careful to provide depth so that Favour is continuously stimulates. And Razia’s intelligence is seen as the play tackles serious ‘issues’ too. It is notable that this is a story of working-class women and that the play is firmly rooted within a London Muslim community. Furthermore, the play is co-produced by Clean Break (whose members include women with lived experience of the criminal justice system). But this is all addressed with a matter of fact, fresh, feeling; none of these factors define the characters, no matter how much they must negotiate life with them.

Instead of problems, the love that comes with motherhood is the focus of these women’s lives. No matter accusations to the contrary, you never doubt the love the family feel for one another, and this drives the play. Razia has created a dramatic space for powerful reflections and truths. That the youngest character takes the lead is a suitably upbeat conclusion to a superb show.