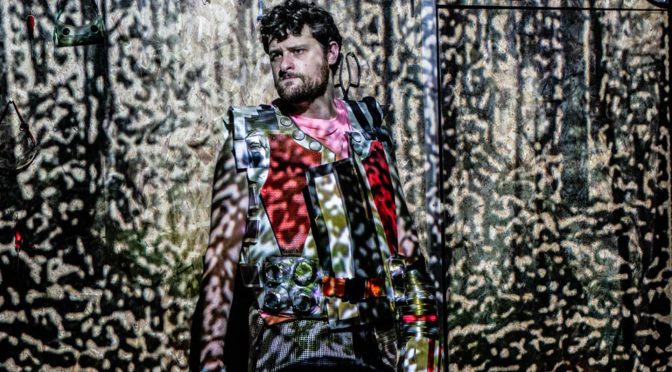 The idea behind Christopher Neels’ and Callum Cameron’s play has potential. Using an inventor to examine men’s mental health is a neat experiment. The agoraphobic oddball Jens makes an amenable hero, easily recognisable as a geek who attempts to deal with childhood trauma by creating an invincible suit and become a real-life superhero. It’s not a bad way to examine what might be thought a peculiarly masculine, yet distinct from macho, effort to escape from real problems and genuine discussion. Getting a laugh out of a serious topic is fine, but the jokes here just aren’t good enough. Ironically, the humour feels like a cop-out so that the play, like Jens, doesn’t engage with the big issues it raises.

Neels and Cameron also direct and are a little too indulgent with their text. This is a short show that drags at times and has too many tentative moments. But they are lucky with their cast, a trio of performers who manage to make the three main roles consistently appealing. James Murfitt takes the lead as Jens, likeable even during his delusions of grandeur, conveying his mania with refreshing subtlety. The support Jens obtains from his brother is credible through the efforts of David North, while his long-suffering partner becomes increasingly interesting in the capable hands of Katy Daghorn.

While the characters aren’t badly written, and are certainly well performed, the play’s structure is messy and there are too many questionable decisions along the way. Things are fine when we’re confined to Jens’ workshop/garage – his world is, by turns, entertaining and moving. But nearly all the other scenes are tacked on, a couple feel like sketches written for something else, and the cast are overwhelmed with extra roles that go nowhere. The action meanders and the conclusion is poor. You can bet that what the super suit should look like was a subject of debate with designer Sophia Pardon and the outcome is funny. But Neck or Nothing would feel much fuller if Jens had just a little more credibility and, as a result, his family more reason to indulge him. Pardon’s video projections, scenes from films and the bears that are the focus of Jens’ fears, are far more effective, but the show relies too heavily on them. It’s admirable that they provide structure and insight, but it’s unfortunate that they also highlight the script’s flaws.