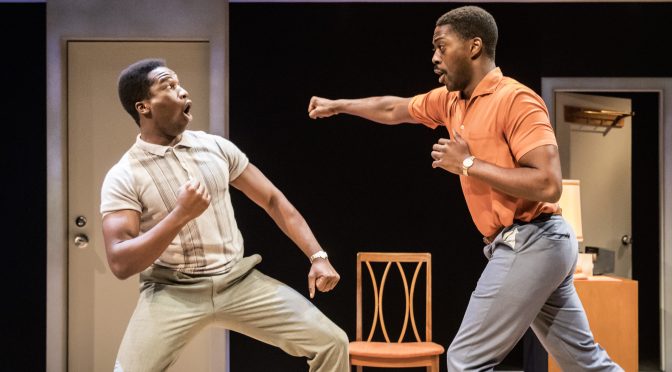 Kemp Powers’ play touches on the depressingly topical struggle against racism with calm sophistication. Placing four iconic African-Americans of the 1960s in one hotel room – each of them at a pivotal moment in their lives and with the US on the brink of change – it’s a brilliantly simple and effective device to examine individual legacies and question how much progress has been made regarding civil rights.

Fresh from winning his fight against Sonny Liston, Cassius Clay is about to become Muhammad Ali. Sope Dirisu gives a show-stealing peformance conveying the young man’s charm and naiveté. Clay is meeting with his mentor Malcolm X, performed by Francois Battiste with control and precision. The activist is keen on claiming prize conversions to Islam but political troubles are the tense undertone, as the bodyguards outside the door remind us.

The two are joined by football star Jim Brown and legendary musician Sam Cooke. Both are secular, independent thinkers, about to branch out into acting and political song writing, respectively. David Ajala plays Brown, easily carrying complex arguments with a deft touch of down-to-earth humour. Arinzé Kene takes the part of Cooke, conveying a fierce articulacy and with a few snatches of singing that display an exceptional voice.

Director Kwame Kwei-Armah knows what a treasure this script is and paces it judiciously, treating it with respect. The relationships are woven like an intricate dance. Tempers flare but the friendship here is firm, providing a realistically casual tone with plenty of banter. Ideas come to the fore, with a streak of melancholy around “self destructive dreams” that endanger all four. With race, politics and religion all linked with questions of celebrity and influence, this is an articulate, intelligent and educative night to remember.