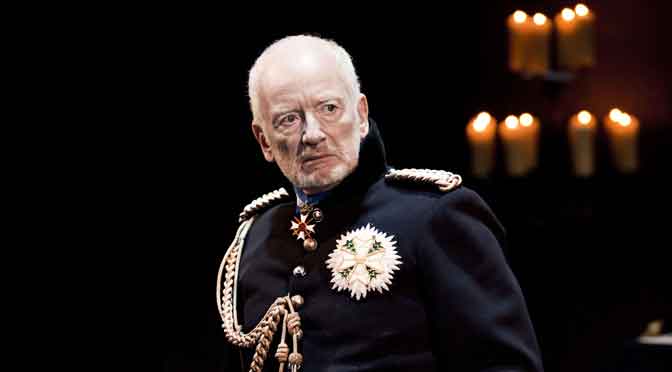 The Donmar’s production of Heinrich von Kleist’s The Prince of Homburg is another attempt to provide London audiences with the chance to see a classic we should all be more familiar with. Written just before the author’s death in 1811, the play is a mixture of romance and military drama, pitting the emotions of its hero with his sense of honour.

The Prince is the kind of dreaming philosopher that director Jonathan Munby deals well with. Munby’s last production at the Donmar, Life is a Dream, shared concerns about the failings of human perception and this production has a similar ethereal feel. But the Prince is also a military leader and when he makes a mistake in battle and is court marshalled, he comes to believe that he should pay for his error with his life. A modern audience is bound to have problems finding this believable. His journey to the decision is too brief to dispel these doubts and Dennis Kelly’s new version bizarrely encourages them.

The problem of motivation seems shared by the cast as well. Charlie Cox as the Prince and Sonya Cassidy as his love interest do well to establish a magnetic relationship, but the emotions surrounding the Prince’s imprisonment and attempts to save, then sacrifice him for the cause of army discipline, are unbelievable. Cox is a fine hero, he ‘does’ dignity well, but you can’t help thinking he is a fool.

Cox gets your sympathy (which is the last thing the character should have) especially given who he is up against – the Elector Frederick in the form of Ian McDiarmid. Playing an evil emperor is bread and butter to McDiarmid (he is the bad guy in the Star Wars films) but he really does excel at it. Bringing every subtlety out of the character he adds humour as well as chilling efficiency to the role. You never doubt him. He is full of frustrations and fears as well as being the consummate politician.

The Prince of Homburg is a classy affair with a stylish design from Angela Davies and a strong supporting cast that often seems wasted. McDiarmid alone makes this production worth seeing. His performance is one of those masterclass affairs that occur far less frequently than we are led to believe. Just don’t expect to get very much else from the evening.