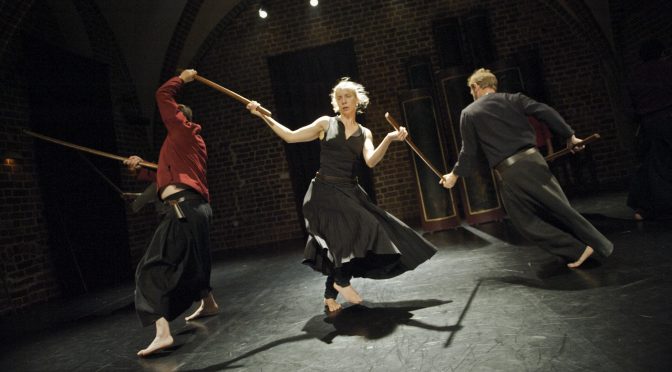 If the thought of Macbeth accompanied by Korean musical instruments, Corsican chants and martial arts-inspired dancing makes you raise an eyebrow – prepare to raise the other one as well, because Polish company Song of the Goat’s production is truly astonishing.

Director Grzegorz Bral makes this bizarre combination work. How exactly is surely a case of theatrical magic. And hard graft. Macbeth is ‘devised’ by the company. This can be a dangerously indulgent technique but Bral and his ensemble have produced a 75-minute show that is as taut as a kayagum string. And if you want to know what that sounds like, it’s yet another reason to see the show.

One proviso – you do have to know Macbeth well to follow what is going on. But this feels like a fair assumption and the intense collaboration process, bringing performers so close to the text, has resulted in great drama. The characters seem to know their fates from the start, which can be unsettling, but means that Gabriel Gawin’s virile Macbeth is deeply moving and both Ian Morgan and Ewan Downie get more out of the roles of Macduff and Banquo than I have ever seen.

There is only one witch in this production but Anu Salonen does enough work for three. More enchanting than supernatural, she dances around the stage manipulating characters and handing them wooden swords and bamboo canes that are used with frightening precision. Salonen grapples with Anna Zubrzycki’s Lady Macbeth, seeming to transform her into the provoking accomplice of her husband and then comforts her after she has been impaled on enough sticks to look like a game of human kerplunk. Both women join the men in striking combative choreography and have stunning voices, deeply melodic and playful or shrill as the need arises.

It is the music that really sets this Macbeth apart. The ensemble performs a variety of polyphonic chants and when they apply this musicality to Shakespeare’s verse the result is breathtaking. This Macbeth is beautiful, not a word you normally associate with the most bloody of plays. The Barbican’s bite festival has more than lived up to the advice that we should ‘do something different’.

Written 4 November 2010 for The London Magazine