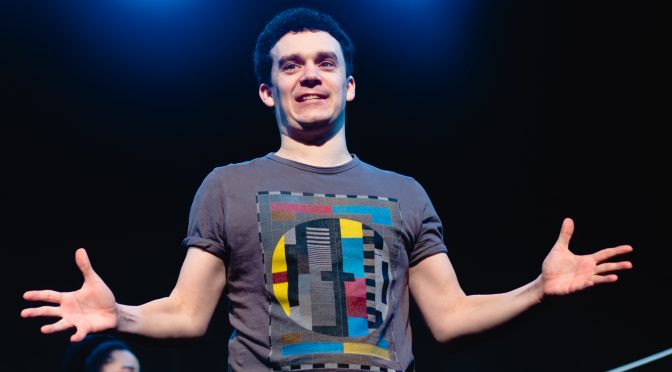 There are laudable aims and a strong idea behind Snapper Theatre’s new production – together they make for a good start. Written by Robbie Curran, who also takes the title role, the play’s hero has Asperger’s and the piece does well to represent his experience and challenge preconceptions. The clever addition is to parallel his youth with that of his cousin, David, played by Ben Lydon, and include the latter’s mental health in the story. Tackling prejudice about Asperger’s is sometimes crudely forceful and the second plot is underworked, but this is strong debut play with plenty of promise for development.

Problems arise with flashbacks to the characters’ childhoods. It’s not just that there are too many of these, but that they are too short. And it’s too easy to imagine lines whittled away to bring the running time to just under an hour. The direction from Lucy Foster could provide more support, while Grace Cronin’s movement work feels out of place. The play ends up disjointed and at times confusing.

The desire to form a connection between the audience and Thomas, to show he is ‘normal’, might excuse how predictable many of the scenes are. But the performances also end up stilted and contain few surprises. The boys’ humour doesn’t develop as they grow into men. This might be depressingly accurate but doesn’t help establish their ages from scene to scene. There are no reservations, however, for the third cast member, Amanda Shodeko who does a great job with several smaller roles: supremely comfortable on stage and eminently watchable, it’s always a thrill to see a performer in a small show who you are sure will go far.

Lydon is strongest as the version of David who is struggling at university. The growing sense that he no longer has to look after his friend is just one factor that leaves Thomas feeling lost. There’s mention of a sick father, troubles with course and career, but none of this is explored. Lydon is left to save what is really half the show, which he works hard to do.

Frustratingly, the structure is set up and sound, with a conclusion at a childhood home that’s a nice reflection of an earlier incident. It’s a shame more time isn’t allowed to bring the show to a satisfying finish.