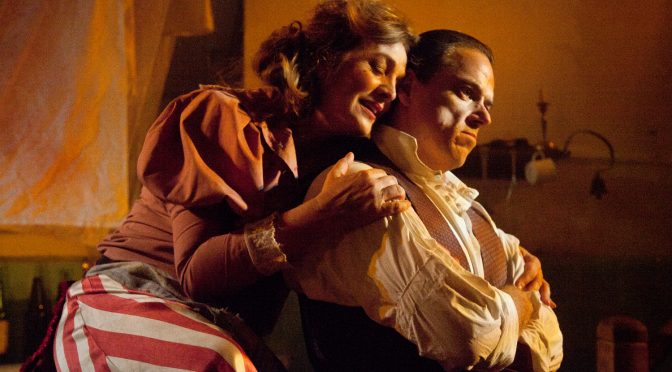 Stephen Sondheim’s wonderful musical about the demon barber of Fleet Street, a psychotic shaver whose murdered customers were put into pies by Mrs Lovett, is always worth going to see. Staging it in a real pie shop is a stroke of genius. Believe it or not, you even pick up your tickets for the show in the barbers across the road.

More than on being on trend with immersive theatre, the staging goes to the heart of the production company’s ambitions: The Tooting Arts Club aims to unite theatre with the community in inspired fashion, and has created a very special event.

Harrington’s Pie and Mash Shop, close to Tooting Broadway Tube, was established in 1908 and is still family run. It’s a tiny place with the kind of basic design beloved of hipster photographers. There’s nowhere to hide and, with only a trio of musicians accompanying, the weight on the cast to make this show work is huge. With director Bill Buckhurst’s help, the production rockets higher than the sales of Mrs Lovett’s pies. Standing on the tables, chatting to the crowd, each performer works incredibly hard. The singing, against the stripped-back score, in such a confined space, is awe-inspiring and the acting skills hard to beat.

Jeremy Secomb makes a superb Todd. Respect to him for playing it really scary, as it would be easier to go for the laughs in a space like this. Secomb provides the grim depth the character deserves and his voice is superb. The hugely talented Siobhán McCarthy plays his accomplice in crime, Lovett, with excellent comic skill. There are few chances to applaud during Sweeney Todd  – clapping seems like an interruption – it’s hard not to with McCarthy’s numbers.

Sweeney Todd usually soaks up a plentiful cast, with lots of extras for those big London crowd scenes, but here we have just six other performers, all of whom are wonderful. Grace Chapman and Nadim Naaman play the charming young couple Johanna and Anthony, Duncan Smith and Ian Mowat are excellent as the villainous men in power, and Joseph Taylor is great as the young Toby. Special mention to Kiara Jay, who seems to be everywhere, though credited as performing just two roles. The whole ensemble revels in the extraordinary buzz around the setting.

What does the unique setting add? To be honest, less than you want to admit. And it has to be said that it’s incredibly uncomfortable; crammed onto a bench with a twisted neck all night. But if you like your musicals up close and personal you can’t get more intimate than just 32 seats. The staging is a huge achievement but the real boast is the excellent production itself.