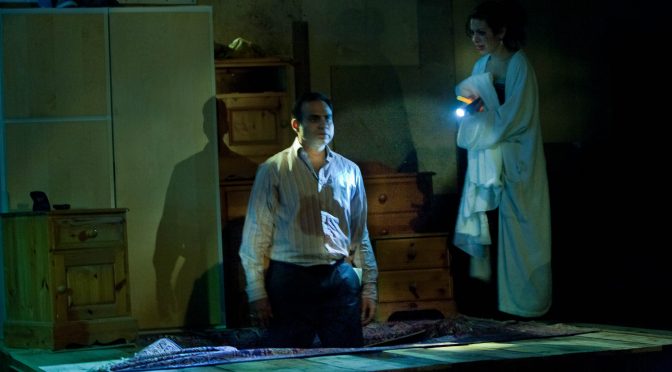 The Oikos Project sees a new temporary theatre, The Jellyfish, erected in Union Street, Southwark. Exciting enough – but this creature really has to be seen to be believed. Under the auspices of The Architecture Foundation, Berlin-based team Kobberling and Kaltwasser have used only reclaimed and recycled materials. As the pop-up phenomena becomes more commercialised, this project takes a stand – it was built by local volunteers and school children. Just gazing at this surreal, strangely beautiful thing is an unmissable experience, learning about the ideas behind it a humbling one.

The building itself seems destined to overshadow whatever play it stages. And that’s a shame, since Oikos the play (the first of two productions scheduled) has plenty to offer. Appropriately it concerns climate change. Neil d’Souza convincingly portrays a successful city trader who, having escaped natural disaster as a child in India, now sees his home in Chiswick flooded and his personal life awash with problems. Dido Miles puts in a great performance as his wife, adrift in her new surroundings and claiming their wealth hasn’t made them happy. Their daughter, played by Amy Dawson, also has issues. Spoilt rotten, she seems trapped in an extended adolescence that is suitably irritating.

Director Topher Campbell and writer Simon Wu have problems that are not of their own making. Climate change quite rightly concerns us all but, with similar issues being addressed down the road at the National Theatre, comparisons are inevitable. These are not necessarily to this play’s detriment. Oikos is tightly constructed, with fascinating mystic undertones and the idea that our lives need a new kind of balance is intelligently presented. The problem is one of audience fatigue.

Serious environmental threats cannot be doubted – both play and project succeed in their aim of making us think. Yet, at the risk of sounding trivial, it should be remembered that theatre can also be a celebration. Given the achievement of building this wonderful new space, a testament to creativity in itself, the play’s dark warning seems at odds with the project’s optimism.

Written 31 August 2010 for The London Magazine