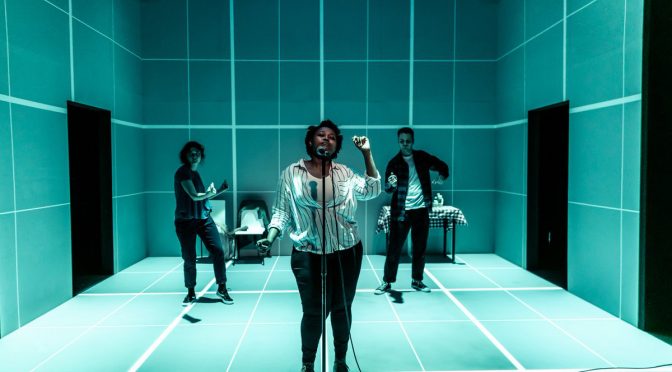 A company that’s well worth following, Engineer Theatre Collective’s new show is notable for its stylish looks and clever invention. The chosen subject matter is rich – our increasingly surveyed lives – and there’s no lack of ideas about depicting the contemporary condition. The cameras that surround us, the devices that are with us, and a sense of exhaustion are all impressively incorporated into the action. But the story itself is poor. And if you like your theatre with a strong narrative, this becomes a weakness on the part of a strong team.

What little plot the play has is far too predictable. Arguments for or against technology – based on a balance between invading privacy and providing safety – are thin. The show ends up as a vague jeremiad on modern life in terms of a fear of being “swallowed up”, powerfully conveyed but with little outcome. There are far too many ideas set in motion and left unresolved. Engineer is a collective, remember? Maybe writer and dramaturg Jesse Fox has not been listened to quite enough? Simon Lyshon’s direction is tight from scene to scene, but there’s a lack of detail in favour of a general atmosphere.

Nonetheless, the execution is excellent. There are three strong performers. The action focuses on Luyanda Unati Lewis-Nyawo, who plays a surveillance operative who inveigles herself into the life of Kat, an emotionally fragile nurse played by Beatrice Scirocchi. Wonders are worked with underdeveloped roles by both actors. Meanwhile, George Evans holds his own as a brother in trouble, who also makes a great deal out of little. And this is a real ensemble piece as the performers take over the scene changes and leap into extra roles. More highlights come with excellent sound and lighting design, from Dom Kennedy and Bethany Gupwell, respectively. It’s exciting to see so much creativity, and that much of it is so simple and low-tech impresses all the more. It’s the company rather than this piece that deserves continued observation.