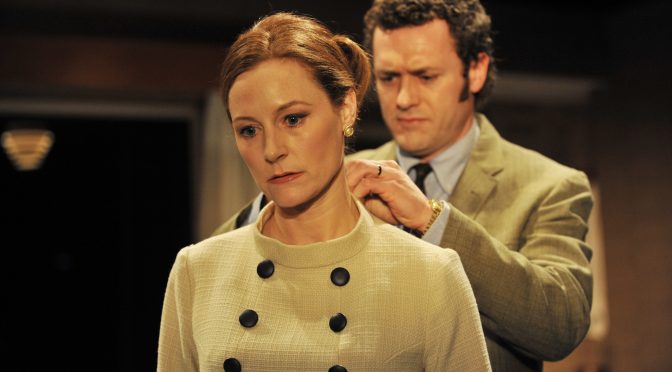 Landford Wilson isn’t a well-known playwright in the UK but he is an extremely successful and noted figure in his native US.  He has received many awards including the Pulitzer Prize for Drama and his critical reputation lies in being one of the founding members of the Circle Repertory Company in New York.  The Donmar’s revival of Serenading Louie gives London audiences a chance of exposure to his work.

The play is the simple story of two, thirty something, couples and the problems in their marriages. Successful lawyer Alex is about to move into politics but is bored with his neurotic wife Gabrielle.  His old college friend and football superstar Carl has become a millionaire property developer who still adores his wife Mary yet becomes aware that she is having an affair.

If this sounds like a mildly interesting soap opera, be warned  – it isn’t.  It isn’t soap opera because its intentions are far too serious and its characters far too well developed. Unfortunately, it also isn’t very interesting.

In a quiet, subtle way this is very much a state of the nation address. Wilson wants us to examine the state of his country – the ambitions and aspirations of its citizens and the nature of their isolated claustrophobic lives.  Written in 1970, its characters have missed most of the sixties counter culture and feel baffled by those not much younger than themselves.  Their wealthy suburban lives are relatively untouched by the changes in America and Wilson successfully conveys a general anxiety about the unknown.  Having worked hard, this generation can’t even find solace in reminiscing about their youth – it is not just the present that disappoints them. Many of these observations are still valid and the play is interesting in terms of its historical content but it is difficult to get too passionate about events in Middle America forty years ago.

The strength of Wilson’s writing comes when he deals with character.  We get to know his quartet inside out in a rigorous psychological examination that is intense, beautifully written but also vaguely unpleasant. Charlotte Emmerson as Gabrielle is genuinely annoying in her opening scene and this is meant as a great compliment – her voice really is like finger nails on a blackboard.  Her husband’s complaints seem understandable until we get to know him better.  Alex, played by Jason Butler Harner, masks his lack of direction with a vague social conscience but he is lost man and breaks down as the play progresses.  Jason O’Mara plays his friend Carl.  Also on the edge, his character’s explosive emotions are the plays highlight and lead to its startling traumatic conclusion.  Geraldine Somerville is wonderful as his wife; sleek, sexy and icy cold, she has her husband and life in the palm of her hand but just doesn’t know what to do next.  These are the kind of roles that actors love but it seems that those playing them like them a great deal more than the audience.  All four are so self-obsessed and unlikeable that it is hard to be interested in what happens to them.

There is much about this play to commend it and plenty about this production that excels.  Peter McKintosh’s period set is great – the detail wonderful and the temptation to lapse into kitsch restrained.  Simon Curtis directs the piece with a similarly talented eye to period and manoeuvres his cast skilfully as the one set serves for both couples’ homes.  They come and go, leave their own homes and visit each other quite seamlessly until Wilson wants to shake us up and has characters talking to one another when they shouldn’t.  Similarly there are occasions when the cast address the audience.  Its clever stuff no doubt, but it isn’t entertaining.

Written 17 February 2010 for The London Magazine