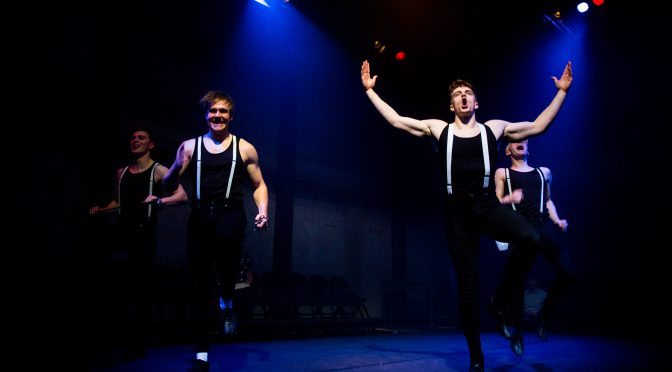 Anthony Burgess’ novel, a dystopian exploration of violent youth with plenty of philosophical speculation, gains a visceral immediacy under Alexandra Spencer-Jones’ stage direction for her company, Action To The Word. As much a dance piece as a work of theatre, the scenes of violence have an unnerving grace that has already earned the show plenty of four-star reviews – deservedly so.

The physicality of the performers is striking. This is a group with gymnastic skills that are awe-inspiring. Alex, the lead “droog”, addicted to “destroy, break, steal, slash” as he “groweth up” with his moloko (milk) drinking gang is a terrifying figure. His crimes mean that the production, never shy of shock tactics, is not for the faint hearted.

In the hugely demanding lead role Jonno Davies can be happy he earns praise for more than his deltoids – although it’s clear milk does a body good. Both his rage rage and the degree of sympathy he evokes when his character is subjected to a corrective therapy show the talents of a strong actor.

What of the strange vocabulary, with its Shakespearean feel and neologisms? Explained a little too late on stage as an “international teenage patois”, the glory of the original book, with Burgess’ insight as a linguist, is that readers comes to understand it so quickly. That comprehension doesn’t happen here and that’s a shame.

The same-full on physicality that serves Davies so well, and creates many powerful scenes for the ensemble, serves other roles less well. The establishment figures Alex encounters before, during and after imprisonment and his sinister treatment are left with little to do but shout. Both Damien Hasson and Simon Cotton embrace double roles with energy, but the characters are flat.

It’s a sexy show – that’s easy – but the sexuality is edgy, dangerous, a challenge for which Spencer-Jones earns respect. The all-male cast has Alex as an abusive bisexual, which complicates the misogyny commented on in the piece. The performers who take on female roles, and camp things up a good deal overall, add further provocation, but it feels old fashioned. And the humour makes the audience as childish as the characters – an uncomfortable point to play with.

A Clockwork Orange, with its probing questions about the role of choice in morality, should be disquieting. That these ideas aren’t explored with Burgess’ original articulacy might be a disappointment. Alex’s adoration of Beethoven feels curtailed by a hotchpotch of musical accompaniment; how “music is heaven” becomes hellish for him, feels pat. But Burgess’ work is important enough to make any appearance on the stage welcome, and the company’s imaginative approach has a lack of timidity that makes it go a long way.