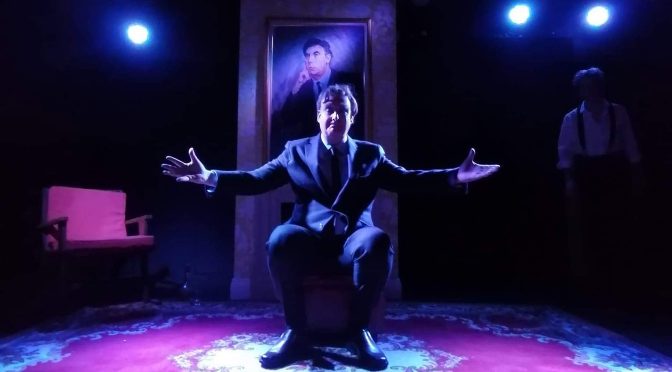 As you’d expect from a show about the legendary comedian Frankie Howerd, Mark Farrelly’s play has lots of laughs. The material, after all, is excellent. But, as a gay man in the public eye before the decriminalisation of homosexuality, Howerd’s story is more than just fun. With a clever twist and psychological insight, Howerd’s End is moving as well as funny.

Farrelly’s script works hard. I suspect it has been long in the making. Covering “sex, death and existential philosophy” is a lot on top of the biography. Ultimately, only two out of three succeed – fanciful digressions on time and mortality prove far-fetched and self-consciously poetic. Whimsy is what we want, but it doesn’t mix well with Weltanschauung.

Thankfully, when it comes to Howerd’s loves and legacy the piece is excellent.

The clever move is to make the play as much about Howerd’s partner, Dennis Heymer, as the man himself. The comic is a ghostly visitation the other can command. Making demands that would never have been met during their life together results in time travel through a difficult relationship. Farrelly knows the “broken-hearted clown” story is too common ground (although Howerd’s troubles were particularly dark). So, we are given a hero in Dennis who energises the play, being free of Howerd’s self-loathing and angry that a fear of intimacy has blighted life.

As for the delivery of this, often painful, love story – it really is superb.

Simon Cartwright’s impersonation of Howerd is remarkable. For a time I wondered if an uncanny physical resemblance was the key but it’s really down to mannerisms being spot on. Like his subject, Cartwright can make you titter with just a raised, suitably bushy, eyebrow.

Howerd could work a crowd like nobody else. Everyone here, including director Joe Harmston, has learned lessons from him. But none so more than Farrelly, who also takes the role of Dennis and draws in the audience expertly.

In character, Farrelly holds his own for comedy but adds an exasperation that raises the drama. That the men had the “tools for joy” in their lives, yet were not happy, isn’t played for innuendo – it’s simply very sad.

As a writer, Farrelly uses the audience, too, drawing us into a final fantasy that is sweet and romantic. Brilliantly, we all end up cooperating as witnesses… to a happy ending for Frank and Dennis that has a funny magic all its own.