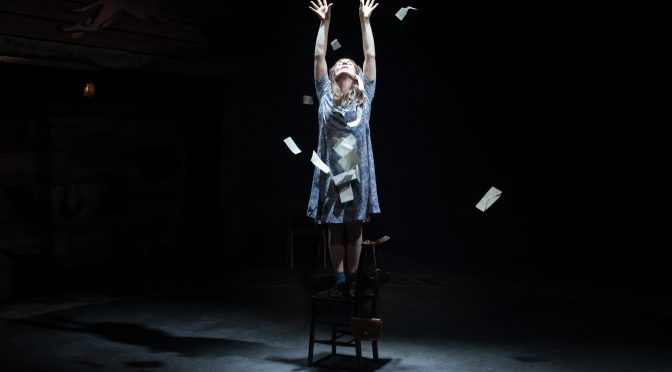 This intriguing musical, about a disfigured woman’s journey across America in the hope of being healed by a television evangelist, won best musical at the New York Drama Critics’ Circle awards with its premiere in 1997. It’s a simple morality tale complicated by adult themes and characters. This production, from director Shuntaro Fujita, does the show proud but cannot hide some odd flaws.

The eponymous heroine is an unlikely central figure, which is for the good. Kaisa Hammarlund gives a brilliant performance in the role, barely stepping off stage during the show and always sounding superb. The problem is that her no nonsense character, and flashbacks to her childhood (where Keiron Crook does well as her father), make her need for a pretty face seem disappointing. Could such a smart woman fall for the fake glamour of the movies? That she does just that makes watching her troubles an uncomfortable affair. While the challenging of themes of self-esteem and the pressure of small-town “superstitions” is admirable, it’s hard to get behind Violet.

Romances that develop during Violet’s travels have potential, but feel rushed. The attraction to a young solider, Montgomery, is contrasted with a more meaningful connection established with his African-American colleague, Flick. Again, the performances are strong, from Matthew Harvey and Jay Marsh, respectively. But this love triangle is too scalene; the right man too obviously right from the start. Despite Harvey’s efforts to introduce tension, Violet’s fling with him seems unbelievable. And, while Flick’s attraction could also have been developed further, especially the racism the relationship would suffer from, it is still overwhelming in terms of plot.

Shuntaro tries hard to gloss over shortcomings with a new configuration for the venue and a revolving stage that do wonders for the space. But, while Bryan Crawley’s work on the book, an adaptation of a short story by Doris Betts, is sturdy enough, his lyrics are functional rather than inspired. Which is an especial shame given the quality of the score from Jeanine Tesori. A mix of country, blues, rock and gospel, the music is always interesting. The sense of time and place are rooted and there’s plenty of invention. When the ensemble acts as a chorus the sound is fantastic and there are marvellous turns for Angelica Allen and Simbi Akande that could easily have been extended.

The aftermath of the encounter between Violet and the preacher she has come to see is a painful summation of Tesori’s musical themes. It’s brilliantly written, superbly performed by Hammarlund, and reveals how well grounded the show is. Violet’s mania at this point, a mix of faith and instability provides a final, albeit too brief, reward for the interesting work on show here.