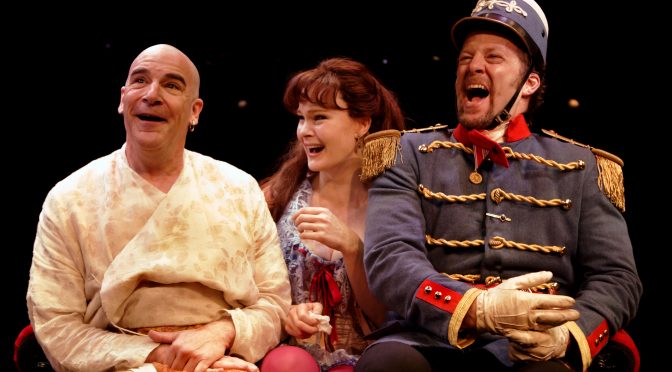 Coming to the Menier Chocolate Factory’s new musical, Paradise Found, slightly later than the first-night critics, it was hard for this writer to avoid the early reviews. These began with an assault by the bloggers and were followed by the pros, who seemed to enjoy panning the show with only marginally less enthusiasm than their amateur colleagues. Combine the Menier’s recent record (success in the West End and on Broadway) with the cast and creatives imported for this show and it is hard to see what could go wrong. Co-directed by Hal Prince and Susan Stroman and starring a fantastic Broadway cast, could it really be as bad as everyone is saying?

At turns dreadfully, offensively, old fashioned and then novel to the point of eccentricity, Paradise Found is odd and unsettling. However, with a cast this talented, the evening is always entertaining. Set to music of Johann Strauss II (see what I mean about odd) with musical direction by Charles Prince, it often sounds lovely and, with a clever set by Beowulf Boritt, it looks pretty good as well.

There is some great comic talent here. John McMartin is very funny as the Shah of Persia travelling to Austria to revive his libido. And it is a privilege to hear Shuler Hensley and Kate Baldwin as the Baron and the prostitute who fall in love. And then there is Mandy Patinkin, who jokes, sings and pauses for thought as a (strangely Zen) eunuch from the Shah’s court.

Although the story is silly (and it is inspired by real life events) this shouldn’t be a huge problem for musical theatre. Things start to fray when the ratio of deliberately bad jokes outweighs those that get genuine laughs. The show is also strangely disjointed, with an interval located before the end of the first act. In the latter part of the evening the action takes place 15 years on and things become darker in tone. The now destitute Baron is performing in a musical of his own story. This vaudeville version of events that bordered on pastiche might have sounded post-modern and clever. It is actually just a bad idea.

Paradise Found is messy, but it is a bold mess with moments of brilliance. Many of its failings don’t really sink in until later. With Prince and Stroman behind it, the faults may be surprising, but these two are big enough to learn lessons and I suspect this won’t be the last we hear of their show. The Menier is to be commended not only for bringing so much talent to our shore but also for taking risks. This is what has brought it so much success recently, and it must be careful that it doesn’t lose this quality.

Written 7 June 2010 for The London Magazine