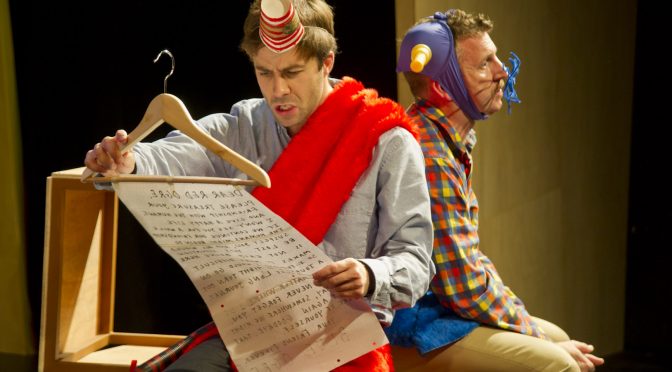 Halcyon Days, the story of strangers who meet on an Internet suicide forum, is a surprising comedy. Writer and director Shoji Kokami takes what could be an earnest, morbid subject matter, and handles it so imaginatively that this potentially grim tale is rendered funny, even bawdy at times.

Kokami presents the story, not as reportage on an Internet phenomenon, but as a real life drama, toying with the fantasies his characters invent in the process. Mark Rawlings plays Hello Kitty, a closet homosexual seeking a flamboyant suicide as an end to his debts. He meets the delusional Masa, performed with intensity by Dan Ford, who is suffering from information overload, and believes that his own suicide could save the world.

This odd couple are joined by a counsellor called Kazumi, a character brought to life by Abigail Boyd, in a skilfully layered performance. Followed everywhere by a ghost (Joe Morrow, making an impressively impish London debut), Kazumi’s intention is to help the men but it’s clear she has issues of her own. A therapy session like no other ensues as the cast prepare a play about a lonely ogre and his friends – it’s deliciously mad stuff ‘yet there is method in’t’.

The blackest of humour pervades Halcyon Days, but there are also touches of farce. Aya Ogawa’s translation of Kokami’s play reveals puns a Carry On film would be proud of, and Rawlings does an especially great job playing up to them. But the halcyon referred to here is a sleeping drug: for all the fun that they are having, the characters are in no Arcadia. They have responsibilities in the real world, all revealed at a clever tempo to ensure that they are misfits that matter to us.

Halcyon Days has an elegiac streak that is central to Kokami’s precise pacing. As the cast gaze at the beauty of the night sky, they learn lessons about themselves and the world. Theirs is a trip to the dark side of the moon well worth watching.

Written 26 August 2011 for The London Magazine