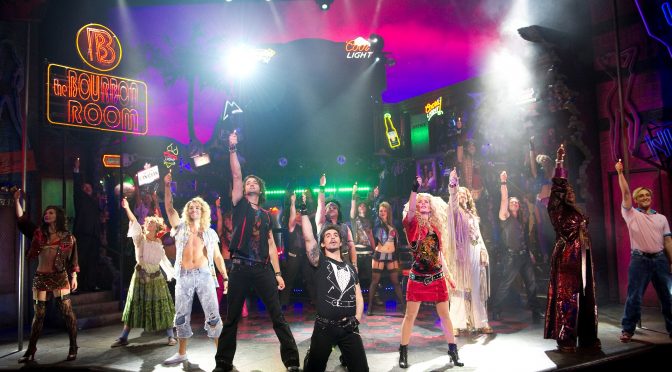 It’s the aim of the critic to provide an objective, knowledgeable appraisal. With Rock of Ages, a new musical at the Shaftesbury Theatre, that ideal is a tough ask when you can’t abide the music involved. Originally produced on Broadway, this tribute show to 80s rock music recycles some of the worst songs I’ve ever heard, ‘boasting’ hits from Bon Jovi, Guns N’ Roses, Europe and the like. Its music so terrible that it doesn’t even qualify as a guilty pleasure. If you disagree – then grab yourself a ticket, because this is the night out for you.

What I can do is spot the talent that has gone into making Rock of Ages: precise direction from Kristin Hanggi, outrageously fun costumes from Gregory Gale and a good book from Chris D’Arienzo. The stars are Justin Lee Collins and Shayne Ward, whose fans will no doubt be pleased to see them, but the real focus is Simon Lipkin, whose wonderful performance shows off his musical theatre credentials and puts him centre stage.

The idea behind Rock of Ages is sound enough. D’Arienzo identifies just how camp this genre can be and sees a connection between it and musical theatre. Grafting the songs on to a traditional plot, which includes young lovers and putting on a show, there is a tongue-in-cheek feel that you can’t help but like. And yet it fails to gel. Rock and dance don’t mix, so Kelly Devine’s efforts at choreography look odd. And while rock might be camp, you can’t push the parallel too far – true camp has an edge of seriousness and the parody here deflates it.

Rock of Ages goes to the very heart of what is good and bad about tribute musicals. It’s light hearted, high spirited and fun… but if the songs aren’t your bag, no matter how much some people are enjoying themselves (and a great many really seem to be), you will be left feeling baffled.

Written 14 November 2011 for The London Magazine