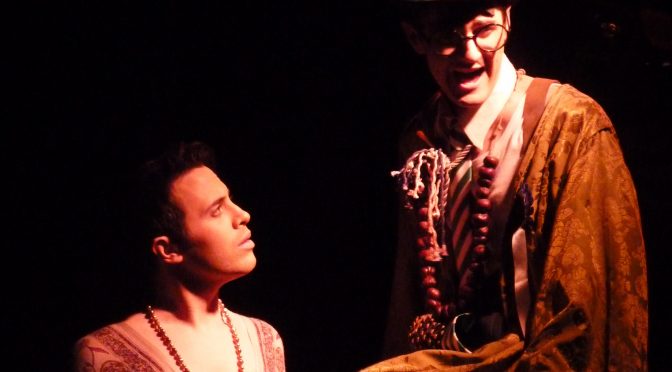 Gilbert and Sullivan are a guilty pleasure. Those confessing admiration can face polite confusion or, at worst, a disdain that might suggest S&M is more acceptable than G&S. There have been many attempts to change opinions about Gilbert and Sullivan but none more liberating than Sasha Regan’s work at the Union Theatre. Her new production of Iolanthe continues this campaign – it is joyous, fun and simply unmissable.

Iolanthe is quite as silly as any other G&S. It’s the one about fairies and the House of Lords. With Regan’s trademark all-male cast, you can imagine where this is heading. But Regan is too clever a director to make things crass, no matter how camp they become. With a nod to Narnia, the action takes place at a school and the magic begins when the costume wardrobe is opened.

This isn’t Gilbert and Sullivan forced into the 21st century. Regan’s masterstroke is not to patronise these eminent Victorians. Gilbert’s satire is still razor sharp and Sullivan’s uncanny ability to write a popular tune ageless. Regan brings out the humour and Chris Mundy’s solo piano accompaniment is a superb interpretation of the score.

The real pay off comes not from innuendo but from sincerity. Victorians could be soppy and G&S were no exception. But Regan allows this so that, behind the laughs, this Iolanthe is sweat. With fairies dressed in furs and pearls and lords wearing conker chains of office, you smile all the way through, while the sentiment washes over you. It is a combination that can only be described as sophisticated.

There is a palpable sense of excitement from a talented cast. Christopher Finn takes the title role in his stride and Shaun McCourt deals impeccably with the Lord Chancellor’s tongue-tying lyrics. It is great to see Alan Richardson at the Union once more. His terrific voice is matched by an endearing stage presence. Kris Manuel is unforgettable in the role of the Fairy Queen, while Matthew James Willis’s Harry Potter-inspired Earl, and Raymond Tait as Private Willis, show off their voices particularly well.

This really is an ensemble piece, as the cast all perform in the equally fantastic realms of the supernatural and the political. As both tripping fairies and noble lords they faultlessly do justice to Mark Smith’s witty choreography. Like the whole production, Smith’s work isn’t just delightful – it is bold and interesting. His use of sign language in dance creates a new level of meaning that complements the humour and excitement of the piece. Regan should join her team on stage as they hold their heads up high when the lords all marry and become fairies themselves! Gilbert and Sullivan fans can come out of the closet at last.

Written 23 November 2010 for The London Magazine