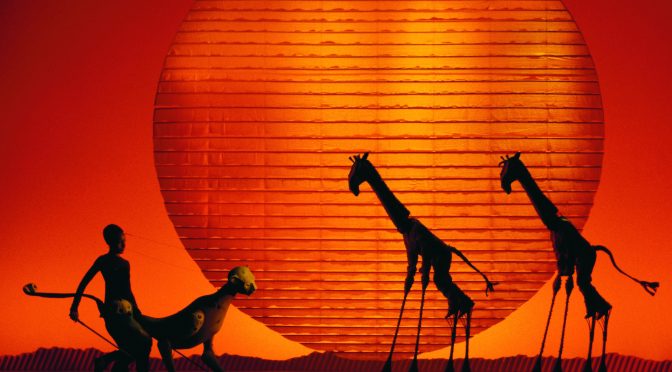 Disney has detractors as well as fans, especially when it comes to the theatre. Stage productions based on movies often feel like money-making machines. Let’s just say that the shop is the first thing that greets visitors to The Lion King. Nonetheless, popular since its première 21 years ago (wow), the story of Simba’s coming of age and coming to power is a great show.

Not that there’s much to the story (even it it is inspired by Hamlet). Like the characters, who make pantomime look like Chekhov, what’s going on is really only for younger members of the audience. The humour is often tiresome. The goodie and the baddie, Mufasa and Scar, only have to show one dimension: current incumbents of the roles, Shaun Escoffery and George Asprey, do it very well. Our hero, Simba (Kayi Ushe), doesn’t so much come to greatness as have it thrust upon him. The only really interesting character is Nala who, as Janique Charles’ performance shows, should probably be the one in charge.

For all the hit songs from Elton John and Tim Rice, you don’t have to enthuse about the score to enjoy The Lion King. Anyway, the musical highlights really come from the choral arrangements by Lebo M.

So, The Lion King is a little like a musical in miniature. The plot, character and score are traditional but truncated. The story is simple, characters stripped back and none of the scenes or songs is very long. But there’s no doubt that the book, by Irene Mecchi, and direction, from Julie Taymor, know exactly what to do. Maybe that’s why children love it, yet all ages appreciate it? The show is confident and comforting.

Surely there is more to such incredible success? Yes. The dancing and puppetry impress all. Hugely complicated technically, the show is a collection of set pieces that are timed to perfection. Garth Fagan’s choreography is ambitious and creative and complements the puppetry designed by Taymor and Michael Curry perfectly. The costumes are justly iconic.

The Lion King delivers its magical moments whenever performers enter the stage or auditorium. Each new creature, filling the stage with colour and light, is greeted with joy. It is the production that wins praise and hearts – alongside the thrill of children seeing that theatre can be better than film. Disney does the stage proud.