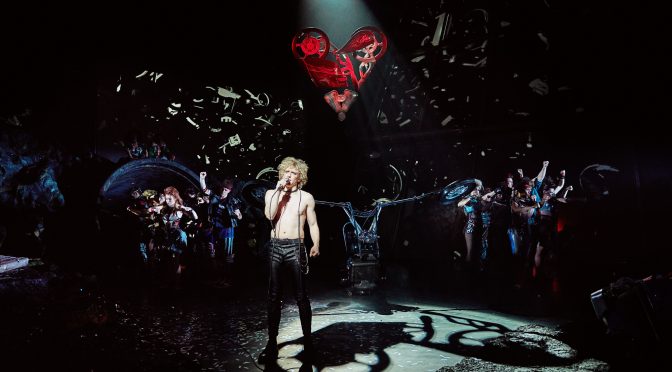 Unlike many musicals based on a back catalogue, you don’t need to be a fan of composer Jim Steinman to enjoy this piece. The music, as its regular performer Meat Loaf appreciated, has a theatricality that transfers easily to the stage. Top-notch production values and performances make the ticket safe value. And there’s an injection of insanity that ensures the show stands out.

As with a previous hit at the Dominion, We Will Rock You, based on the music of Queen, the book for the show, also by Steinman, is set in a dystopian future. A mutation fixing our hero Strat at the age of 18 results in a strange Peter Pan figure. Leaving aside his odd taste in poetry, it makes an ethereally bizarre lead for Andrew Polec, who takes on the part with astonishing bravado. Polec doesn’t deliver a single note without treating it like grand opera and barely stays still for a moment.

Strat falls for Raven, daughter of the dastardly Falco, enemy to Strat’s particular Lost Boys. Why he’s a villain isn’t that clear as the focus is on his marriage. Whatever, there are great performances from Rob Fowler and Sharon Sexton as both parents, and a look back on their courting is a real highlight. As for Raven, a sincere effort has been made with the role and Christina Bennington tries her best. But let’s just say she still ends up, well… straddling… rather a lot. Add to the Romeo and Juliet vibe, a bizarre Tink(erbell) for Strat’s Rebel Without A Cause, a younger Sal Mineo character  who’s devoted until spurned. There’s no lack of narrative, and it’s all great fun. Remember everyone is as camp as Christmas and the whole thing becomes brilliantly mad.

The music itself is well constructed – you don’t sell as many records as Steinman without knowing a thing or two – but the triumph for the show comes with Robert Emery’s musical direction and Steve Sidwell’s orchestration. Variety is injected into even those famous ballads, adapted into ensemble pieces with performers belting them out. Some of the lyrics are shocking – “You’re a ghost and I’ve been cursed but if you were exorcised it would only make it worse” – but, no matter how bad they are, Steinman repeats lines (a lot) injecting a mock profundity that becomes infectious. To top it all is Jon Bausor’s design, which has two sequences, a bike crash and a drug-induced dream, that use stunning special effects. Such technical skill combined with the inexplicably goofy make Bat Out of Hell jaw-droppingly great.