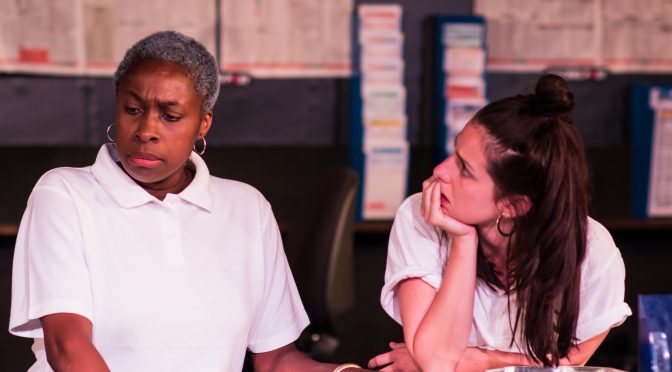 Unlike plenty of pastimes, arguably including going to the theatre, gambling appeals to all ages and social groups. So a high-street betting shop has great potential as a location for drama, which Justin Hopper’s play utilises fully, if without sufficient focus. Flutter does, inevitably, deal with the topic of compulsive gambling. But its strength lies in showing a cross-section of society drawn to an unusual kind of community centre – which might make you think twice when you walk past a Ladbrokes again.

The play is predictable. Even big twists can be seen coming a long way off. There’s an interesting theme trying to get out, with several characters stuck in habits and in thrall to tradition, while betting on what might happen in the future frightens them. Rather than exploring this, Hopper develops a pedestrian drama, albeit one full of events and comedy. Flutter never quite runs smoothly enough and, regrettably, Gavin Dent’s direction doesn’t make the going any fairer, with fits and starts that are awkward.

Hopper’s crafting of characters is good, though. And Dent has produced strong work from his cast. Nicken Kotak and Abby Cassidy do well as young lovers with a storyline that’s too compressed. Shango Baku captivates as elderly regular Yankee Bob, while Richie Donaldson and Greg Snowden both play troubled characters with winning style. The storylines aren’t well developed but the characters themselves convince. Leading the way, with a modest tale of mature love, are Antonia Kemi Coker as the shop’s manager, and Mark Keegan as her most loyal punter, Dennis. Theirs is a long-standing affection waiting to blossom – admittedly sentimental but believable and moving. With them, the play’s qualities – likeable personalities and effective performances – coalesce, making it odds on you will enjoy the show.