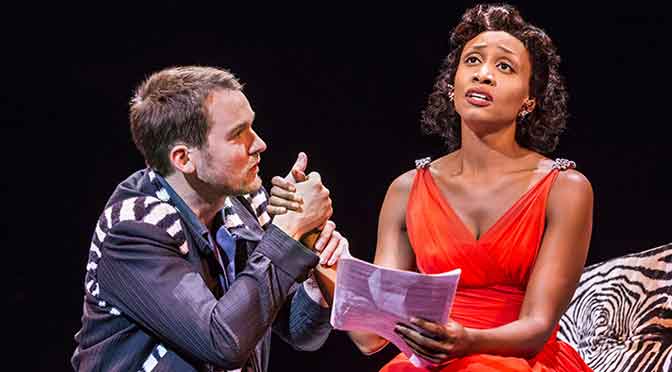 Memphis was a success on Broadway, winning four Tony Awards, including the coveted Best Musical trophy. Now at the Shaftesbury Theatre, it’s easy to see why it was such a hit. One of those shows that wears its heart and soul on its sleeve, it is, in the cast’s joyous catchphrase, totally hockadoo!

Aspiring white disc jockey Huey, based on real-life radio pioneers in the 1950s, falls in love with black music and starts to make it mainstream. Huey’s career provides one story arc, with racial tensions abounding and exacerbated by a burgeoning love affair with the talented black singer Felicia. While simplistic, to its credit, Memphis doesn’t shy away from the realities of sexism or violence, giving the show plenty of dramatic tension.

The book by Joe DiPietro is tightly constructed and the themes inspirational enough to guarantee a thoughtful feelgood factor. The script has enough one-liners to inject humour and director Christopher Ashley’s efficiency produces a fast moving show that builds momentum nicely. Music is from former Bon Jovi star David Bryan. Sighs of relief that this is an original score (it could so easily have been another jukebox musical) but more impressively, that there are some great numbers. In keeping with the topic, the musical sources are broad; rock ’n’ roll, blues, gospel (my favourite) and a nice pop hit called ‘Someday’, which I bet you’ll be humming as you leave.

The set design by David Gallo is slick and the high-energy choreography by Sergio Trujillo thrilling. The gymnastic ensemble is vigorous and if some of the secondary roles could be fuller, in particular that of Huey’s mother who has an unconvincing comedy number, each performer embraces time in the spotlight as if they were in a stadium. This is a star vehicle; the story of Huey and Felicia so perfectly embodies the bigger themes, and in these roles Killian Donnelly and Beverley Knight shine.

The focus of the story is madcap MC, Huey, and Donnelly doesn’t waste a line, be it sung or spoken. He’s one of those performers who makes of virtue of showing how hard he is working, and we warm to him throughout. As for the luminous Knight, it’s hard to believe Memphis is only her second stage role. Each time she hustles on stage, starting to sing as soon as she can, the atmosphere is magnificent. Knight’s acting skill isn’t negligible – she can hold a big stage and that is hard – but she’s really there for the singing and her voice will make you want to visit Memphis more than once.