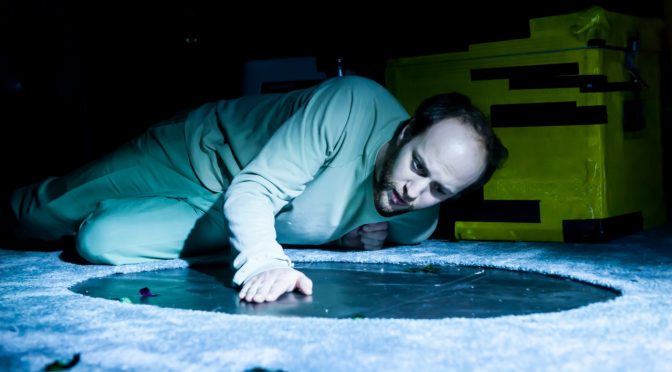 The smell of weed and spray paint and a walk down Leake Street mean it must be time for this year’s always-bigger-than-ever arts extravaganza under Waterloo Station. Yesterday was opening night no less for the start of eight weeks of events. With more than 400 shows to come, any single offering couldn’t be representative of the fare on offer, but the Anima Theatre Company’s show embodies my experience of previous years, both for good and ill. The Vault Festival is a great place for exciting new writing that isn’t afraid of taking risks that don’t always pay off.

There are plenty of ideas behind Serafina Cusack’s take on Dante’s Inferno. And that’s impressive. The show asks us to imagine Dante as a heroin addict and his (dead) Beatrice haunting him. But if you don’t know that before you go in you’ll be pretty lost. It is a good idea, testament to the potential here, as we descend into a hell that might be grief or cold turkey. But there’s a sense of trying too hard to be relevant and, dare I say it, trying to shock. Does Beatrice, also an addict, really have to be pregnant?

That same sense of trying too hard fills the production. The direction from Henry C Krempels feels manic, which works some of the time, but the show needs slowing down. The energy involved may be admirable but is also a little exhausting. The sound design is intrusive, although that might have been an attempt to compensate for noise emanating from the show next door, which is a problem throughout the venue. Cusack’s script has its moments, and is certainly stylish, but suffers from too many nonsensical touches; there’s a reference to the smell of an artery that made me stumble – who knows what one of those smells like?

The three consciously odd characters are difficult company, if well performed. The get-out clause is that what we see is a drug-induced haze, and Cusack’s play on time and hallucinations is great stuff. Mark Conway takes the lead role and does well with bringing out the piece’s considerable wit – Cusack’s comedy is another strength. But the two other characters (‘her’ and ‘his brother’) are, respectively, unbelievable and thinly written. That said, Rebecca Layoo and Richard James Clarke offer strong support and should be proud of their performances.

Creating characters who come close to being merely devices – and using a concept in the place of a plot – isn’t to everyone’s taste. Both can make a piece strangely cold and hard to engage with. A firmer criticism is that this show isn’t clear about what it wants to do. Tell us about mourning? Or addiction? Both, presumably, but that proves too much for a short show and the insights here are limited. Blue Departed fails to convince, but the experiment is admirable and effort valiant.