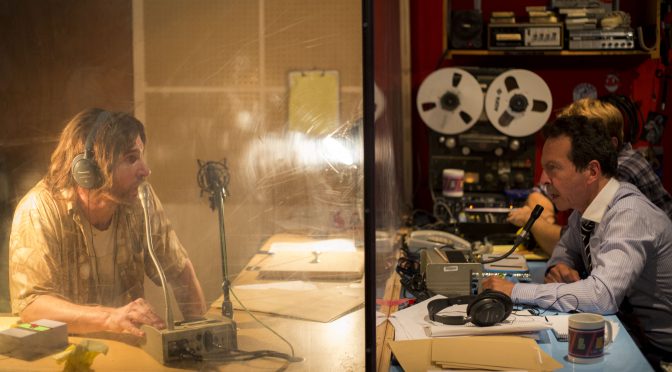 Theatre loves finding relevance in older plays and it’s easy to see why a revival of Eric Bogosian’s 1987 play is a candidate. One night with a ‘shock jock’ on US talk radio is a great scenario and the combination of free speech as a credo, with neo-Nazi’s and loons leaping on board, can’t help but feel prescient. It’s a relief, in a sense, to be reminded that hate speech is nothing new; as the play’s lead actor Matthew Jure notes in the programme, these phone-in shows were the proud parents of Twitter trolls. There are plenty of salient observations and much to ponder on.

It’s a shame neither the play nor production lives up to its potential. While Jure’s DJ, Barry Champlain, specialises in cutting off callers, Bogosian himself leaves too much hanging. There’s a hoax bomb threat, a love affair and an impromptu visit from a caller (a role Ceallach Spellman does well with), but no storyline feels resolved. Maybe there’s not enough for the supporting cast to work with: monologues from Barry’s colleagues, played by Molly McNerney and George Turvey, are the only chance they have to stand out. Director Sean Turner doesn’t inject enough energy, so there’s little sense of the drama of live broadcast and the script’s humour is blunted. And, while Max Dorey’s design is impressive, it proves impractical.

Another dead end is Barry’s history, a mythology created by the radio station manager. We need to see a lot more of Andy Secombe, who plays this part – his is the only character who develops past cliché. And the idea of Barry as a fraud could have been explored much earlier, since his real agenda and his delusions of grandeur form the kernel of the play. Jure conveys desperation and malice well and makes a final breakdown moving, but he’s sorely lacking in charisma (after all, Barry has fans). Instead, there’s only contrariness – quickly boring and frequently silly – and anger. Talk Radio has fallen for Barry’s own nemesis – taking things too seriously – leading to listeners tuning in and dropping off.