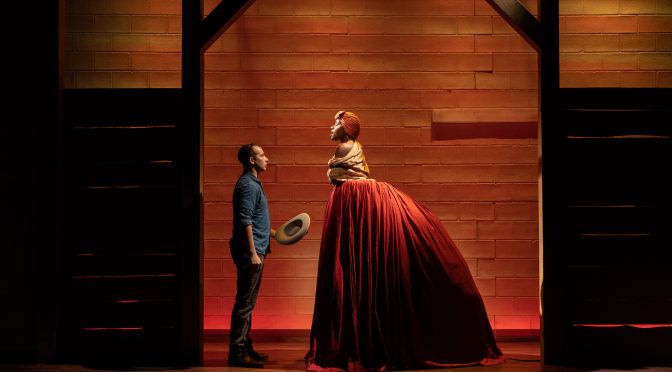 It’s often claimed that New York theatre critics have more power than their London counterparts. That Ben Brantley and Jesse Green included this piece in a list of best American plays in the last quarter century should have you putting on your trainers and running up Dean Street. Created and performed by Jennifer Kidwell and Scott R. Sheppard Underground Railroad Game is a real original that examines racism and history by making the audience laugh and squirm in turn. Confrontation and explicit content are balanced by insight and humility. Best of all, it’s eminently theatrical – no other medium could produce the same effect. It’s nice when reviewers get it right.

The idea is that the audience are US school children attending classes about the American Civil War, learning about slavery and the eponymous escape route set up by Abolitionists at the same time. The teachers holding the class use performance and a level of enthusiasm that beggars belief. If it’s years since you’ve been in a classroom, this one is barely recognisable (for a UK audience, the spinning jenny and land enclosure just couldn’t lend themselves to such dramatics), as we are encouraged to cheer and sing along. But Kidwell and Sheppard create joyously endearing characters and make these sections fun. There’s a degree of sweet naivety behind this sharp satire that leads to great comedy.

The Audience Participation in the show (so dreaded it deserves capital letters) needs to be mentioned. Not just because it’s a personal phobia but since in a sense a London audience isn’t seeing the show at its best. Soho Theatre is a great choice of venue, but even here a UK crowd likes a fourth wall. I’ll own up to being bad at joining in… anything embarrassing, and I study my shoes. It’s a pity, as Sheppard in particular is superb at dealing with the crowd, but his is a masterclass that just isn’t welcome. Furthermore, the play is culturally specific – that’s not a fault, the writing is precise and articulate. But the effort serves, inadvertently, to remind us of our distance from our American cousins. It’s fascinating but less potent than it would be for the makers’ home crowd.

There is much more to Underground Railroad Gamethan a spoof exercise in education. To make sure the legacy of history is clear, Kidwell and Sheppard’s characters begin a romance that doesn’t just comment on race today, but is infused by it. Again, there are some sweet moments and some very funny ones, mostly from male crassness. But as the couple’s affair spills into and takes over their class presentations – it’s brilliantly disorientating – making us question the role of exhibitionism, there are some very uncomfortable scenes. Taibi Magar’s direction helps here – the show is boldly paced with long pauses that build tension.

Kidwell’s teacher takes the part of a slave woman in a visually arresting tableau that shows the power of racial stereotypes in sexual fantasies. This is a bold statement to make, and such powerful honesty is truly inspiring. From here we’ve enough faith in Kidwell and Sheppard’s integrity to know a scene will arrive that objectifies the white male body in turn. Cue a fantasia of “sexual detention” where Teacher Caroline strips Teacher Stuart and uses a ruler on him. And the uncomfortable truth is that, yes, his nudity is more shocking than hers. Point proved. The bravery of both scenes from the performers is remarkable and they are superbly acted. It’s testament that such explicit elements are thought provoking rather than just shocking. And you get to check if your shoes need polishing.