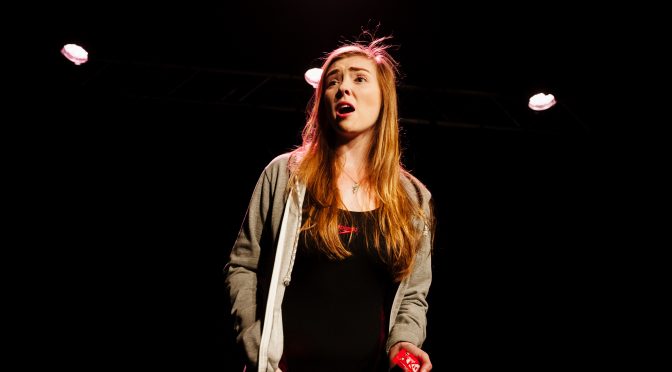 Diving into the start of a season of plays written by women and presented under the title ‘Who Runs the World?’, this hour-long show – written by and featuring Sarah Milton – goes swimmingly well as we follow young Daisy in and around the pool during her first competitive race. With family and friends all portrayed by Milton, it’s a bravura performance with plenty of laughs, serious topics and a dramatic trauma. There’s undoubtedly too much going on, but the mood swings mirror teenage life uncannily and the skill behind the show should make it a gold-medal winner.

Milton’s ability as a writer can best be seen with the allowance she makes for an audience’s more sophisticated responses to the authentic young voices we hear. It’s a space in the text that director Tom Wright is sympathetic to. Whether it’s Daisy’s laugh-out-loud insensitivity or comments from adults that we understand the motivation for more than she does, this is a look at a Millennial mind-set that patronises neither young nor old. It’s disappointing that a central plot, around a criminal boyfriend, isn’t elaborated. And overall Daisy’s youth results in observations on life that are predictable and pat; the good will built up towards the character has to save the show. Thankfully, there is plenty of it.

Milton’s skills as a performer are highly impressive, having created a strong central role and some lovely cameos for herself she really delivers. The split-second changes between characters are impressive, if showy. The comedy skills feel instinctive – her timing a joy to watch. But what really makes the performance special is the way the crowd is worked. Wright creates moments when Daisy is removed from us despite her narration – caught up in the cleansing power of swimming or a revealing nightmare. But most of the time Daisy appeals directly and Milton is superb at this: creating intimacy, engendering confidences and truly winning hearts. Let’s hope medals follow.