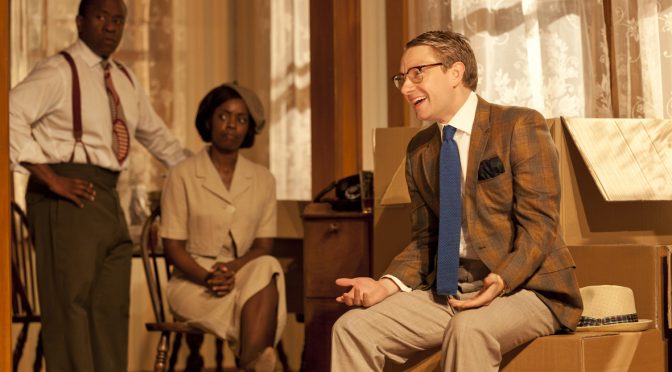 Property is a London obsession, so American writer Bruce Norris’ Clybourne Park – the story of a neighbourhood told through the development of one house – has the potential to strike a chord with the audience at the Royal Court.

The house in question is not, like so many in literature, a repository of values. Rather it is blank canvas that, in two different times, characters project their ideas onto. Act one is set in the 1950s with the house about to be sold to the area’s first black residents – cue debate.
Unfortunately, Norris’ vision of the 50s doesn’t ring true. Director Dominic Cooke fails to reign in the sense of parody and the cast (with the exception of Lorna Brown and Lucian Msamati) lose themselves in it. There are some beautiful asides, often taking place just inside the front door, but the forced politeness we are supposed to laugh at is unconvincing.

Act two moves to safer ground, and better things, in the present day. The house is about to be pulled down and two yuppies plan to build a new home on the site. The same actors appear for a community meeting (a more satisfying scenario for discussion) concerning what is now considered the black heritage of the area. Norris’ observation and dialogue is sharp, dark and entertaining, his wit rapacious and cruel.

The performances take off with Martin Freeman justly confident in his comic ability, Sophie Thompson and Sarah Goldberg positively shinning, and Brown and Msamati again wonderful. There are some awkward moments as a series of tasteless old jokes are recited, less to entertain than to test reactions in a contrived manner, but generally this comedy of (bad) manners works superbly well.

A subplot concerning a tragedy in the house becomes lost, making the concerns of the present day characters seem trivial, and the danger is that we start to lose interest in them. The connections between eras, potentially so rich, are not given enough space. Norris’ play, which has been well received in America, needs further development. As it stands, Clydbourne Park should never have been given planning permission.

Written 3 September 2010 for The London Magazine