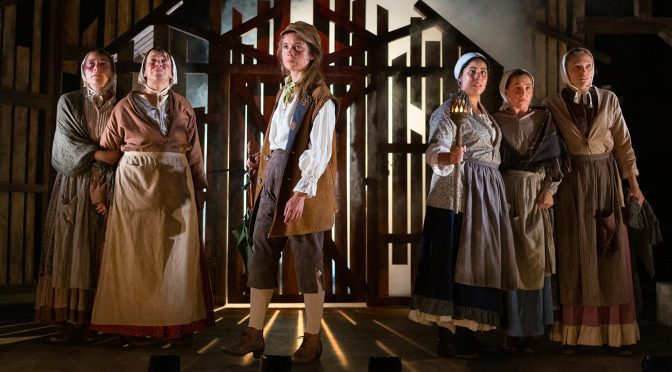 Beth Flintoff brings this story of a murder victim to the stage with skill and originality. Based on a real-life case that was a news sensation in 1828, this production is a thriller, but in an unexpected fashion. The Ballad of Maria Marten is more social history than murder mystery – and is all the better for that.

The focus is on Marten’s life rather than death, taking in village society and the status of women. Marten’s childhood was difficult but not unhappy – we see close bonds of friendship. Her first encounter with a man was little more than prostitution but later there was a true love affair. Considering Marten’s brutal death, there’s a lot of joy in this ballad.

The speculative biography and convincing picture of another time and place are brought to the stage by only six performers. They are all strong. But Elizabeth Crarer’s massive title role is awe inspiring. Other characters are types with work to do: the timid stepmother, the “brazen” one and the religious friend. But Sarah Goddard, Bethan Nash and Susie Barrett manage to show us depth in the trickiest roles. The latter two impress twice over, performing as two of the men in Marten’s life.

It is when using the performers together that director Hal Chambers secures the strongest theatrical moments. Acting literally as a chorus – the songs from Luke Potter are fantastic – the cast physically supports Marten at moments of crisis. Aided by movement direction from Rebecca Randall, there are beautiful scenes as they dance, dress and clean their friend.

After the interval the play gets darker. Marten’s relationship with her murderer William Corder is used by Flintoff to explore “coercive control”. Crarer shines as she performs powerful scenes solo. Flintoff’s research with Lighthouse Women’s Aid, which works with those affected by domestic abuse or violence, has paid off. Along with the dramatic tension, there is much to learn as gaslighting leads to mental breakdown.

The idea of denying Corder an appearance on stage is powerful. A further twist in the way tales of murdered women get told is less successful. Flintoff also wants to look at the legacy of violence on Marten’s friends. These women deserve a voice, too, of course, but the stories become truncated. The incendiary finale is neat but rushed. Even so, the show is thoroughly recommended – ideas and execution are grand. This ballad deserves to be a big hit.