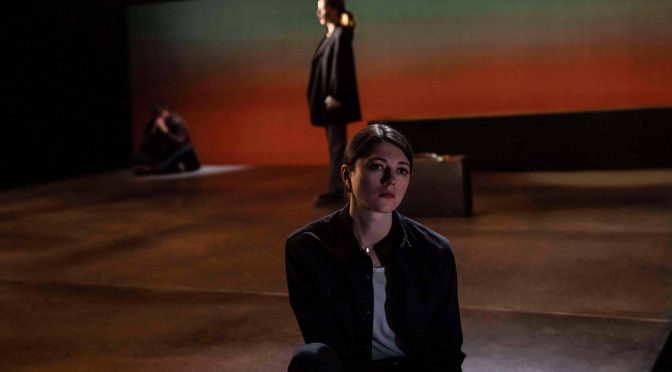 The striking use of words might be the best way to consider Naomi Wallace’s play. With an autodidact heroine, who reads encyclopaedia, the vocabulary in the play is verbose. Lots of cliché and colloquialism, along with arresting imagery that mixes the obscure and the mundane, make the play poetic and Wallace’s voice unique. The script is erudite but also obtuse and enervating. And a little word overpowers other descriptions – The Breach is odd.

The story the words are telling isn’t without drama. Scenes alternate between four teenagers, including Jude and her brother Acton, in 1977 and 1991. A bizarre, cultish competition to prove the friendship between three boys, which turns Jude into a victim, unfolds with tension and unexpected repercussions. The challenge is for the boys to “top my love” with sacrifices that bind them together. But the results, let alone the motivation, are bizarre.

Sarah Frankcom’s direction is keen to preserve the tone of the piece – respectful and controlled with a restraint that results in a static production. Frankcom is sensitive to Wallace’s tight structure but the play itself is cluttered with ideas and detail. Connections to time and place, politics and economics, feel thrown in and the arguments around consent are poorly developed.

There’s no doubt the scenario is powerful. Without a plot spoiler, Wallace tries to remove physical violence from sexual abuse – to question what difference results. But using exaggeration to bring home the cruelty with which men can treat women is a blunt tool. And Jude’s reactions to what happens to her simply baffle. Even the way Jude and her brother mourn their father (another ill-explored topic) by rolling on the ground and imagining his final moments, are hard to swallow (however stylish).

There are casualties to Wallace’s approach – the performers. While the seven strong cast are professional, their characters are mere mouthpieces for the playwright. It’s only Jasmine Blackborow and Shannon Tarbet, who both play Jude, that manage to inject emotion or even much interest. The male characters simply make you squirm. The Breach isn’t for the fainthearted and has a haunting quality but it is too enigmatic for anybody’s good.