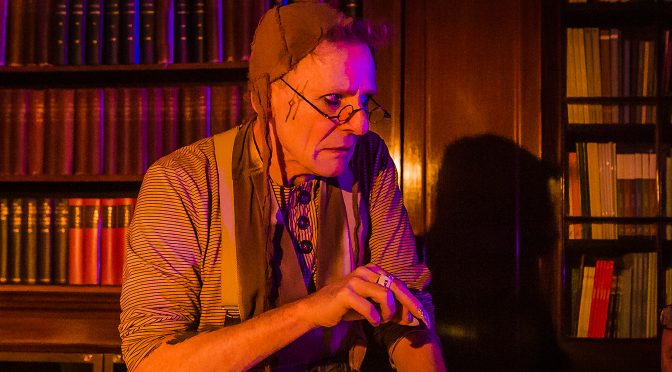 Inspired by the HG Wells novel, this immersive show has the huge benefit of being staged in The London Library. Playwright Jonathan Holloway’s new story unfolds in the gorgeous reading rooms and wonderful bookstacks. Admittedly, it’s a slight on the show that its main attraction is a bibliophile’s dream locale, but director Natasha Rickman and her team at Creation Theatre really do showcase the building magnificently.

Small groups are led around by an individual time traveller and mine – performed by Paul (PK) Taylor – was excellent, being good at engaging those who wanted interaction and leaving alone those who did not. Injecting a sense of urgency, even spookiness, he even managed to cover up a technical hitch for a good while. Joined for a couple of scenes by Graeme Rose as a computer who reminded me of a Gilbert and George artwork, the two did well with an anarchic streak that is the best of Holloway’s script.

There’s a cheeky humour to the show that I felt growing on me. With the idea that things are being changed constantly – including our socks – by illegal time travellers, there are plenty of smart lines. Playing with the past, especially with famous authors, should appeal to the audience, while claiming that the first instance of time travel was in New York nightclub Studio 54 (and playing Donna Summer in the library) is a great idea. It’s a shame it all gets more serious.

The Time Machine has a lot of important things to say. Wells would no doubt approve. But doom and gloom about the future mean this machine stalls. A “torrent of information” we’re exposed to is delivered well and bite-sized gobbets of science and philosophy are digestible enough. But too many scenarios of Armageddon arrive – each a cliché and fuelled, you guessed it, by conspiracies. Maybe we just don’t need more talk of epidemics right now but, rather than feeling topical, the show feels tired.

Taylor keeps up the energy (joined by Sarah Edwardson and Funlola Olufunwa with two underwritten roles that they try hard with), and there’s a real effort to introduce passion and urgency. But a lot of what’s said becomes silly and the show’s originality evaporates. When it comes to imagining the future, this feels like old news. The only safe prediction should be an increase in membership for The London Library.