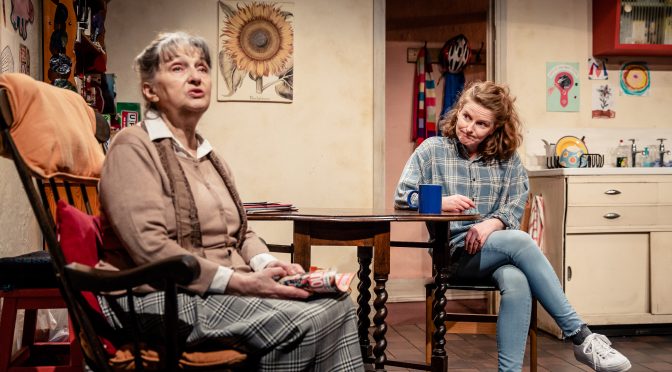 John Fitzpatrick’s new play is an intimate family drama with an old-fashioned kitchen sink feel that’s crammed with contemporary concerns. There are three generations of women, and insights into their different stages of life. Along with nice comic touches, Reared is always entertaining and often endearing, but also too rambling.

Entering a house “full of secrets”, which Fitzpatrick has fun revealing, we follow Caitlin’s pregnancy, learn of her mother’s post-natal depression, and see the demise into dementia of grandmother Nora. I’m guessing a point of reference is Lady Macbeth – she’s Caitlin’s audition piece for drama school – and all three women show a steely determination that some (not I!) might characterise as unfeminine. But if this is a point we are supposed to take away, Fitzpatrick need to be more explicit. Nonetheless, these are strong roles for Shelley Atkinson, Paddy Glynn and Danielle Phillips, who all acquit themselves well. A series of touching scenes, full of frankness and humour (the comedy especially well handled by Atkinson), are thoughtfully directed by Sarah Davey-Hull.

Two pretty flaky male characters are under-developed (although well performed by Daniel Crossley and Rohan Nedd) – apart from a few jokes it’s a wonder what they are doing in the play. Another issue is a timid overarching structure, which leads to a conspicuous lack of tension, despite the dramatic topics covered. Too many stories are set up without exploration, let alone resolution, and important events are passed over, especially the fate of Caitlin’s child. Given the connection engendered by such strong characters, that feels a little like cheating. Even if many moments are strong, Reared comes too close to being a series of sketches rather than a fully grown play.