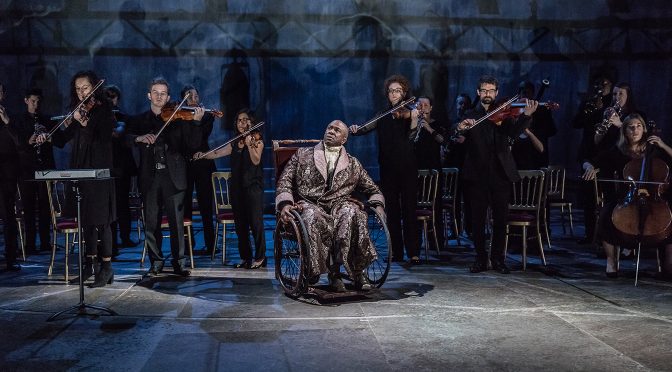 Although mediocrity is mentioned many times in Peter Schaffer’s play, it is not a word to describe the playwright’s masterpiece. The battle between the average composer Antonio Salieri and the divinely gifted Mozart makes for a great combination of drama and history with big ideas around posterity and religion.

This production, energetically directed by Michael Longhurst, dates from 2017. It is notable for the inclusion of the Southbank Sinfonia (which you can also donate to). The musicians move around the stage and interact with the cast as a sense of theatrical complicity – an intelligent response to the text – is carefully nurtured.

There’s a superb leading performance from Lucian Msamati as Salieri, who conveys the character’s sense of arrogance and pain, always keeping the audience on side. Msamati makes the play’s theoretical (and theological) questions emotive. And he has an easy comic touch. There are also strong turns from his ‘Venticelli’ – servants who bring him gossip – played by Sarah Amankwah and Hammed Animashaun. As an aside, the latter has been a lockdown revelation for me, having revisited, or caught up with, shows he has consistently excelled in.

That Longhurst’s achievements aren’t fully conveyed on the screen is something we should be getting used too. It is hard to appreciate just how well he uses the Olivier stage. Close-up filming has a tendency to make the show look chaotic rather than choreographed. And it is a disappointment that Adam Gillen’s performance as Mozart comes across as shrill and oddly accented: I remember being impressed when I saw him on stage. Again, he is playing for an auditorium and not a camera.

Any quibbles reinforce what theatregoers love and miss about a life experience. With Amadeus being the final show in the season offered by the National Theatre because of Covid-19 shutting its doors, all those involved can be proud. Seeing a body of work, as the whole world has been able to do, of such diversity and quality has been awe-inspiring. NTLive has been more than welcome – it has been a real light during lockdown.