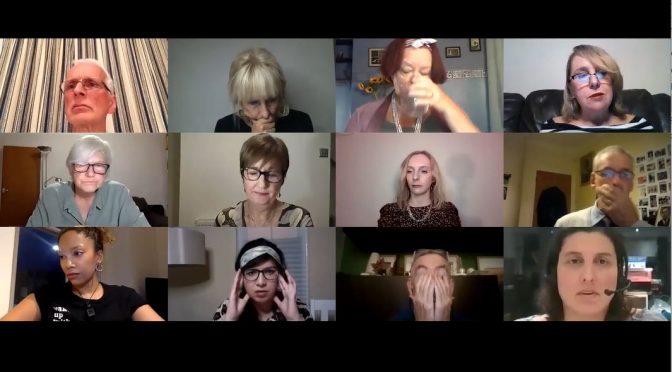 Yet another venue missed by many during the lockdown is Jez Bond’s Finsbury Park theatre. But while the stage lights are off, work has still been going on. This entertaining new play from Martin Murphy, part of a creative learning programme forced online, is the result.

Written to be performed as a conference call, the format may be already over-familiar but it works well enough. Jury is distinguished by its ambition and subject matter. If the comedy and drama aren’t as well balanced as they might be, it’s a lot more interesting than its real-life equivalent.

The scenario first: this Zoom call is a serious one. Twelve members of the public are called to a high-profile criminal trial. The pressure social distancing has placed on the justice system, added to by a time limit on deliberations, adds topicality. If the comedy tone, like some of the characters, tackles the problem lightly, the issue is well-worth remembering.

Of the 12 characters we meet, many are too broadly depicted and their prejudices a touch too transparent. Possibly, the wish to distinguish a large number of people quickly preoccupied Murphy. Nonetheless, Sara Odeen-Isbister’s heavily accented Ukranian Anya is naughtily funny. And Stefania Jardim’s Jal is great value, too. It’s all held together nicely by the increasingly exasperated foreperson Mel, played by Jacquie Cassidy. Maria Thomas manages to inject some drama with her character, Keenan, talking the most sense. It’s a shame Eileen Christie’s character of Pat is the only one to have serious moments alongside nice comic touches.

As for the show’s ambition, anyone who has to deal with calls of this kind is sure to be impressed by the rehearsal process, let alone the final outcome. Director Amy Allen, with help from video editor Akeal Iqbal, highlight the flaws and problems of the technology with a natural touch. The action is swift and exciting. This is one conference call that isn’t so frustrating you want it to be over as soon as possible.