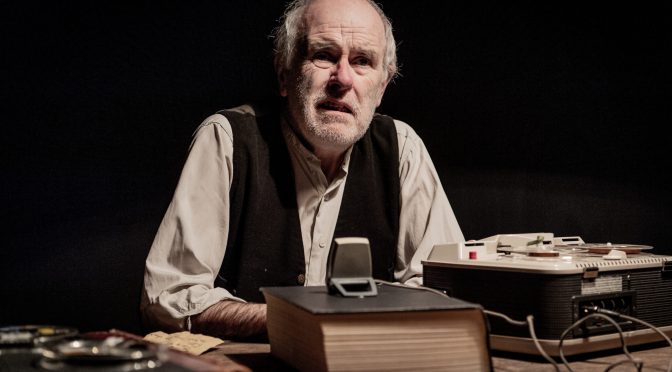 It’s easy to see why this programme of short plays by Samuel Beckett is already a sell-out hit. A superb cast and direction from none other than Trevor Nunn make it a very special treat. The chance to see a famous piece – and two that deserve to be better known – makes it perfect for Beckett fans and newbies. Check out the theatre’s gala performance on the 30 January if you’re flush, or its 5@5 day tickets if you’re youthful, and here’s hoping for a transfer!

First up, the most famous piece, Krapp’s Last Tape is presented is with taut precision. As its titular hero listens to a recording he made in the past, the idea that we become very different people during the course of our lives is palpable. James Hayes takes the role and gives a performance of remarkable variety – not a nuance of Krapp’s interaction with his past voice is missed. It really is theatrical perfection.

For me, the big thrill comes next with Eh Joe, which has Niall Buggy listening to another recording, this time an imagined voice from his past. Buggy gives a tremendously focused performance – he doesn’t say a word – but his character disintegrates as his memories haunt him. In a nod to its origin as a piece for television, his face is filmed, adding to a sense of paranoia. The accusing ghost from his past is a voiceover performed by Lisa Dwan. Reminding him of affairs and failings, it becomes truly terrifying. While Joe tries “throttling the dead in his head” he also needs them – when the voices end so will his life – the past defines us and the only escape is death.

It might be a bit of a relief to end the programme on a lighter note. While The Old Tune continues the themes of memory and old age the tone is very different. Buggy makes another appearance, joined by David Threlfall, as two old acquaintances reminisce. Or at least try to… Beckett mixes up stories and dates as the two become confused to surprisingly gentle comic effect. A melancholy is still prevalent, and both performers effectively maintain this.

It’s not in curating the selection that makes this a great offering from Nunn; there’s no overstating connections between the plays and the direction shows a discipline and precision that makes the most of the brevity of each. Working with some long-standing contributors and clearly revelling in the intimacy of the venue, the approach to all three matches Beckett’s own confidence and vision for them.