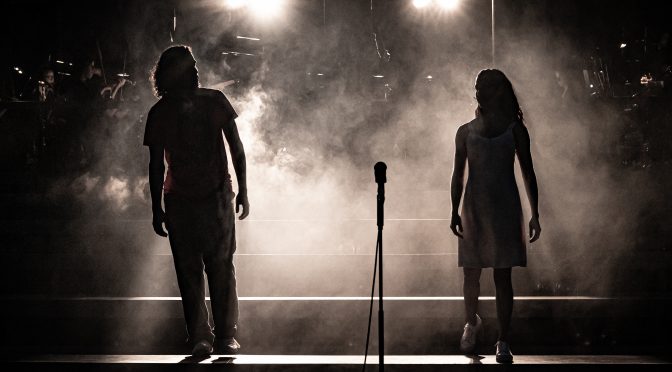 This production of the Andrew Lloyd Webber and Tim Rice classic must surely be the musical revival of the year. Recruiting director Jamie Lloyd has resulted in the biggest ever box-office success for Timothy Sheader’s open-air venue.

Lloyd’s irreverent streak suits early Rice/Lloyd Webber surprisingly well. It’s useful to remember that Evita started out as a concept album – free from the constraints of staging. Lloyd presents a stripped back version, akin to a concert, where the paraphernalia of politics relies on Soutra Gilmour’s costume design along with balloons, cheerleaders and confetti cannons galore. There isn’t much sense of place or period – instead we get a naked examination of power that feels it could be set any time or place… including now.

While ostensibly a biography of Eva Perón, néeDuarte, the controversial First Lady of Argentina between 1946 and 1952, Evita is really the story of two people – or should that be two approaches to government? The titular lead’s relationship with the show’s narrator, Che Guevara, is symbiotic as much as adversarial and Lloyd brings this out fearlessly. There’s a creepy scene suggesting a ménage with President Perón and the characters are made to share physical discomfort. At other moments, their intimacy suggests a twinning and is heartfelt. The duo proves fascinating.

Lloyd’s appreciation of Evita and Che is brought out wonderfully by his leads Samantha Pauly and Trent Saunders. Saunders is a magnetic presence who commands the stage; never mind the character, you could have him on a poster quite easily. With Pauly, at first, freshness is the key; she presents a young girl who is quick to laugh, even giggle. It’s only when the middle-classes are mentioned that Eva gets mad, frightening, in fact. She’s a political animal, which highlights the misogyny she experiences to great effect. As her health declines, Eva’s even angry with God. The contrast, if this isn’t insulting shorthand, is that Che is Rock while Eva is inspired by Pop; both are stars but the differences raise interesting questions. You may have heard the roles sung with more nuance, maybe with more beauty, but these are intelligent performances delivering Lloyd’s requirements.

The show’s dream sequence (the Waltz for Eva and Che) has everyone at their very best – it is amazing theatre. While Che is beaten, tarred and feathered with paint and confetti, Evita narrates her illness as under her control – “the choice was mine and mine completely”. Recall that Lloyd Webber and Rice’s previous work was Jesus Christ Superstar and the mind starts to boggle. Note that Che strips himself, while Eva’s saintly status has been played with all along. Lloyd brings out messianic tones of political cults with devastating force.

In reminding us how political a story Evita is, Lloyd focuses on protest. Filling the production with menace raises questions about populist regimes that are regrettably pertinent. Lloyd’s greatest ally is choreographer Fabian Aloise, who should surely be looking forward to awards season given his fantastic work here. A crack ensemble of dancers, integral to the action, power the show. Performing as the aristocracy and military one moment and then the descamisados the next, they fight for and against Evita with the most exquisite movements. Aloise deserves full praise for contributing to Lloyd’s astounding vision.