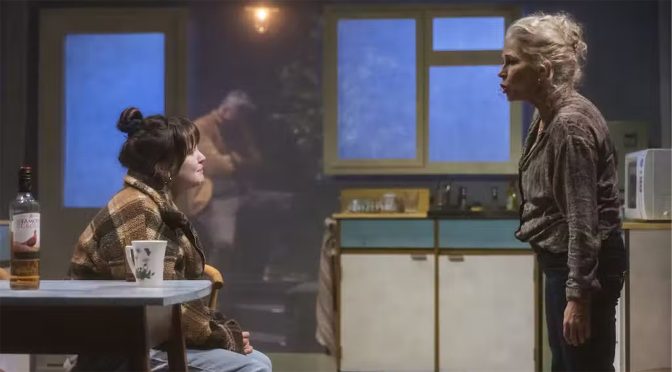 Clive Judd’s Papatango New Writing Prize-winning play bravely tries an audience’s patience. A thoughtful look at grief, and a novel kind of ghost story, the play’s tight focus and slow pace show confidence. That the domestic drama we spend time with doesn’t quite justify two hours is not all Judd’s fault.

The design by Jasmine Swan is disastrous. A gauze veil that stands for the walls of the room the play is set in proves hugely frustrating. What little the set achieves in spooky moments (thanks, really, to Bethany Gupwell’s strong lighting) cannot make up for being able to see so, so little throughout the show. It is a terrible idea.

Sympathetic direction by George Turvey and fine performances by a talented cast sustain a first hour as we get to meet Jess, her parents Monica and Jeff, and prodigal cousin Matt, returning for the first time since his grandfather’s death. Grieving is the theme, handled with sensitivity and intelligence. It takes a while to work out how much the family has fallen apart without this (too shadowy) paterfamilias.

There’s a quiet tension and touches of humour that impress. Although the younger characters are better written, Judd handles all oddities calmly; there are plenty of frustrations as the shopping is put away. It’s all well observed, although little happens. The skill comes with revealing how deep the characters’ problems are. The growing sense of complex lives and their history is well played out.

The fulsome roles are made the most of. Lucy Benjamin and Mark Frost play the older characters with gusto. Their daughter on stage is the better role and Hannah Millward shows a flexibility that is to her credit. Sam Baker-Jones adds intrigue to his guileless character of Matt. Matt’s interest in sound recordings and hope that they might reveal voices of the dead doesn’t end up sinister – no small achievement.

Safety is the key. The Gen-Z angst that Judd skilfully details is handled sensitively. It’s interesting to hear Jess’s take on being “edgy”. And how what she and her cousin crave is security. As if to answer his characters, Judd becomes reassuring. Here is an original take on a ghost story, but don’t expect to be spooked. The play doesn’t grip – I’m not sure it is trying to – but could still prove memorable.