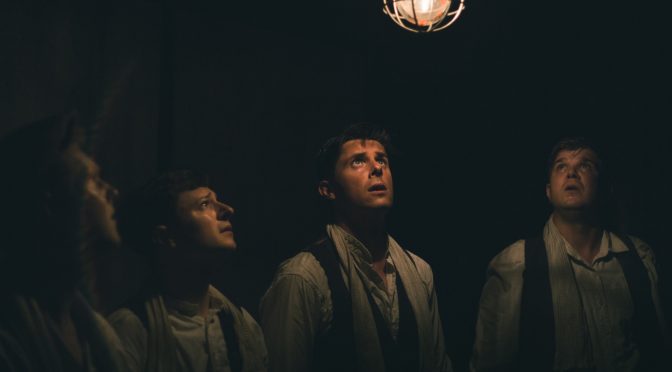 Kieran Knowles’ play, which started in the Finborough Theatre’s Sunday and Monday slot, before a national tour, and now returns for an extended run, is set in Sheffield’s steel industry during World War II. Learning about the workers’ lives in a somewhat earnest manner, with a heavy dose of nostalgia, the drama revolves around a near-death experience on the night of a vicious bombing raid. The writing is tight and the production superb, making this a strong fringe piece deserving many fans.

A sense of comradeship among four steel workers is well evoked by Knowles, who stars alongside Salvatore D’Aquilla, Paul Tinto and James Wallwork. Finishing one another’s sentences, and working fluidly together as they mime manufacturing, producing commendable performances. Only D’Aquilla’s character feels delineated satisfactorily, though, and as a result his performance slightly overpowers. Getting more laughs than played for, the inexplicable amusement a West London audience finds in the Yorkshire accent might have been taken into account: that’s my only criticism of director Bryony Shanahan, who consistently enforces the strong passages of writing excellently.

The lyricism surrounding factory work – a “magic” the men see in their manual labour – is the most inspiring aspect of the play, which is preoccupied with time and the idea that the factory is a home and shapes identities. Combining the strong physicality of the performances, simple staging (especially when the men are trapped after the bombing) and direct addresses to the audience, Knowles and Shanahan know how to win a crowd. I suspect this is a work that will be around again soon, and often.