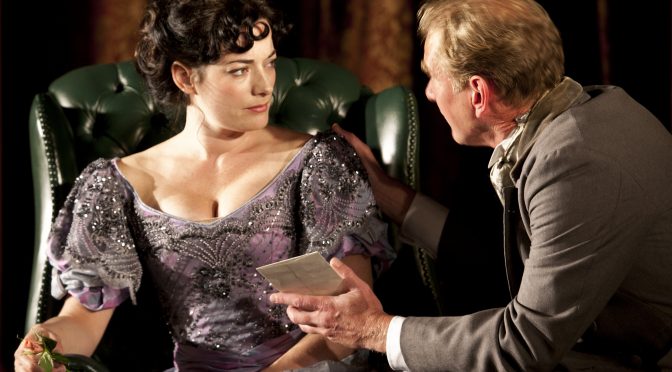 Stephen Unwin’s production of Arthur Wing Pinero’s 1893 play, at the Rose Theatre in Kingston, is a quality affair. A version of the ‘fallen woman’ tale so beloved of Victorians, this tragic story of a marriage that attempts to defy conventions is satisfyingly constructed and superbly performed. Aubrey Tanqueray’s decision to wed a woman with a past – motivated mainly by ideals and partly by pomposity – is doomed from the start (beware any plan that means moving from St James to Surrey), and the object of his devotion, Paula, doesn’t help. Understandably, she really isn’t keen on the move.

James Wilby is perfect as a defiant, blustering Aubrey. Laura Michelle Kelly takes on the title role with skill and style. Director Unwin has described her part as an English Hedda Gabler but it’s hard to see her character as that complex. Victorian melodrama can be a tricky thing. There’s the appeal of a period piece, of course, but any moral problems raised will never engage us as they would have Pinero’s contemporaries. The danger is that the drama becomes a comedy and that problem is not entirely avoided by Unwin’s direction.

That said, the humour that comes from the supporting cast is first class. Joseph Alessi deals with Pinero’s sophisticated dialogue superbly as Aubrey’s larger-than-life bachelor friend Cayley Drummle. And there is a fine performance from Sally Tatum as a deliciously rapacious former actress with slippery RP who has married into the upper classes. All great fun, but it detracts from the unsettling drama within the piece. The Second Mrs Tanqueray sets up a moral maze that seems remote, at best a curiosity. Thankfully the strength of Wilby and Kelly’s performances stops it all from striking you as just silly. Most of the time.

Written 8 October 2012 for The London Magazine