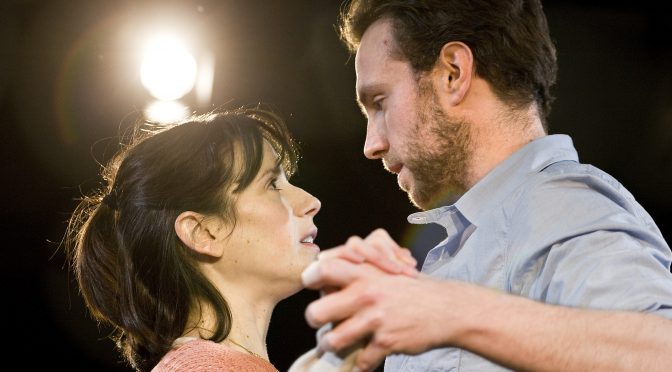 Constellations, a new play by Nick Payne at the Royal Court, applies the theory that there are multiple universes onto one couple. “Everything you’ve ever and never done” is played out in different ‘multiverses’ creating many stories. In a series of short scenes the relationship on stage is presented in parallel narratives – from friendship to marriage, in sickness and in health, rejection to reconciliation. These multiple realities make Constellations a truly wonderful play.

By turn hilarious, with sharp comic observations, then dealing with tragic events, there’s an ironic eye to this multiverse idea that makes Constellations a playful affair. The decisions any playwright faces when making a drama mirror those we face in life: Payne wants to show all these choices with a virtuoso display that runs his actors and audience through the gamut of possibilities.

Repeated dialogue and stops and starts that occur on entering each new universe are handled skilfully by director Michael Longhurst. And the repetition of lines allows Sally Hawkins and Rafe Spall to give stellar performances as they modulate their delivery of the same conversations in different contexts. Spall’s comic ability and incontrovertible charm are perfect for the likeable character he plays, while the moments of vulnerability show his sensitivity.

Both actors have to turn on a dime, as they switch from universe to universe, and they excel at this. Sally Hawkins is truly remarkable not only at getting laughs, but at exploring the play’s darker moments. Whenever she despairs it is deeply moving, all the more so since only a second before she was making us giggle. Seldom have I laughed and cried in such close proximity.

Constellations marks a development in Payne’s writing not to be missed. It’s an ambitious, confident piece which retains his warm wit yet has a bleak edge. The work is also beautifully poetic – the revisited phrases are not only a comic device, but wrought to create a hypnotic symphony of feelings.

If this sounds pretentious then think again: Payne works in another universe where experimentation like this isn’t pompous. There’s no intellectual posturing here and, while the ideas are a challenge, this is a practical play extolling experience, embracing our condition and offering consolation not with philosophy but physics.

Written 20 January 2012 for The London Magazine