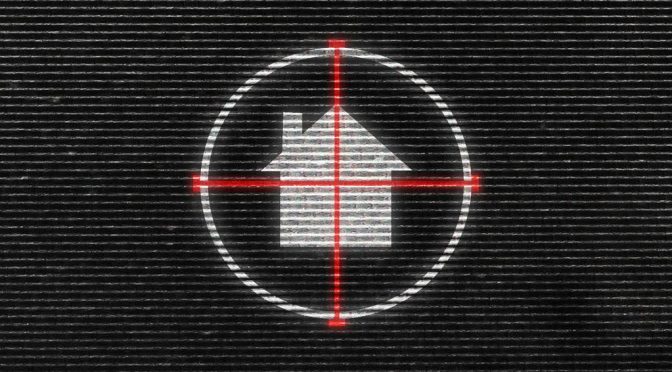 The element of surprise in Mike Bartlett’s new work, Game, is a big part of its success. Theatregoers aren’t even allowed to buy the programme before the show – a neat trick that really piqued my interest. The evening is too good to give this Game away, but rest assured that this original and disturbing show isn’t one you will forget in a hurry.

It’s safe to say the play seems inspired by Big Brother and shoot-‘em-up computer games. But Bartlett’s target is neither celebrity nor mankind’s inherent violence; instead, it’s the housing market and our increasingly unequal society.

The scenario involves desperate people in a crazy situation. The plot may have flaws, but that’s not the point. Staged with amazing technical virtuosity by director Sacha Wares, with Miriam Buether’s set having transformed the theatre, the play presents a deliberately distorted and exaggerated view.

The action is literally from multiple perspectives – scenes are hidden from you and exposed to other audience members. And there are televisions to watch while you hear everything through personal headphones. So the show is immersive (if that’s your thing, Game is a must-see) and adds up to a very individual experience that’s uncomfortably intimate and uniquely theatrical.

Game aims to acknowledge too many societal woes. While Jodie McNee and Mike Noble give brilliant performances in the lead roles, minor characters are caricatures in service to blisteringly satirical moments. It’s always powerful, though. To take one key moment, we are presented with a dilemma over whether to watch the action on stage or look away. One character, ably performed by Kevin Harvey, promises not to look. Do we watch the action or watch him via camera to see if he is true to his word? Either way, we become implicit – whether as voyeur or censor.

As with previous works, Bartlett takes his outlandish premise and builds on it marvellously. There is an incredible tension at the start of each scene as the story progresses and becomes more extreme – you know you won’t like what is coming next. I can see it’s kind of brilliant, but I’ll put my hands up and admit it pushed me too far. House hunting is never much fun, but Bartlett’s treatment left me feeling depressed and a little bit sick.