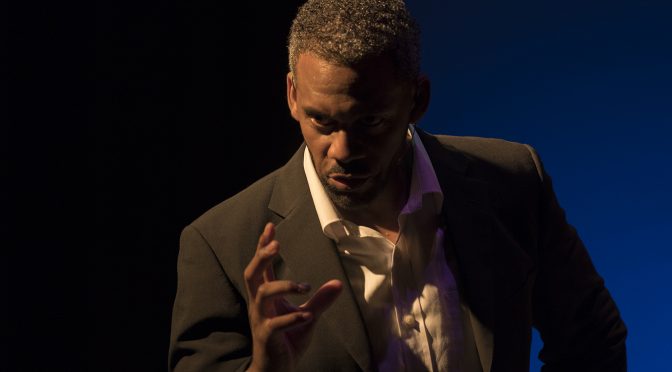 Based on real events, Ryan Calais Cameron’s play about the death of a Black man in police custody is powerful and important. Even the suggestion that such events deserve the show’s title is stirring. As for the work of director Anastasia Osei-Kuffour and her star Richard Blackwood – it is exemplary.

The poetry of Typical is key to the show’s success – it sold out at the Edinburgh Festival and received rave reviews on its London transfer. Cameron’s ability with words deserves further antonyms to his play’s title. And Blackwood’s delivery of the script is a revelation – in this specially filmed version, he handles rhythm with at first playfulness and then power. Also excellent is the show’s pacing, which Osei-Kuffour and her camera crew do so well with, ensuring every minute of this hour-long performance is essential.

Time is taken to establish Blackwood’s character. In his engaging performance, we come to know a man who jokes that he is “a hazard”. He’s got bad taste in music and good ideas about the design of a toaster. Appealing and believable, his plans for a night out and learning about his friends and family are endearing.

It doesn’t take long before attempts to have fun go wrong. The fact that there’s no plot spoiler here is depressing… but the drama still works. Indeed, tension mounts as our hero – and that’s the best word – struggles to keep his cool in the face of ‘casual’ racism that becomes violent. It would be good if the woman we meet had more personality, but Cameron makes a point about the sexual stereotypes that surround black men concisely and powerfully.

A subsequent fight and then encounter with the police (all the more frustrating as it takes place in a hospital) brings us to a final third. It’s a section that deserves the trigger warning that comes with the show. It is a further tribute to Blackwood that it is physically uncomfortable to watch. Inspired by events surrounding a former paratrooper who died in 1998, Typical is dedicated to Christopher Alder. This outstanding show serves as a moving tribute to him and the many more men and women who have died in police custody.