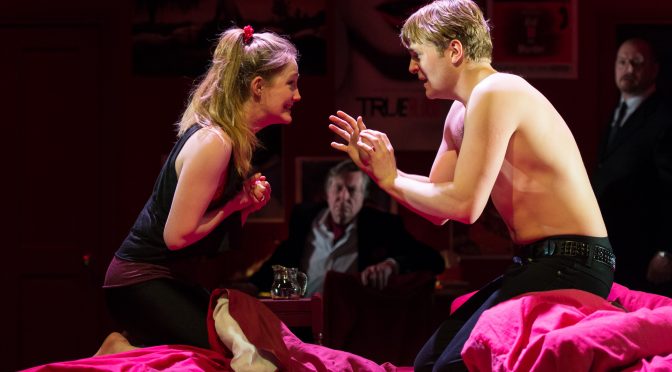 The Cheek By Jowl theatre company can’t come to London often enough for my liking – its visits are anticipated events. Touring to the Barbican for the last few years, this month it stages Alfred Jarry’s Ubu Roi and revives its 2011 production of John Ford’s ‘Tis Pity She’s A Whore. The latter is a vivid adaptation of the bloody incest tragedy, filled with modern choreography and startling music. And it revels in the horror and gore.

Ford doesn’t hold back. Nor does director Declan Donnellan, who towers over the show, or designer Nick Ormerod, who has created eye-popping imagery. Set in the teenage Annabella’s bedroom, with its vampire posters and red décor (she even drinks cranberry juice), this is the scene of her coupling with her brother Giovanni, a nuptial night from hell with her husband Soranzo and the many schemes that fill the play. The bed is always centre-stage: cavorted on, plotted on, the locale for sex and violence. With red sheets, of course.

Donnellan’s committed cast gives exhaustive performances. Orlando James and Eve Ponsonby are the siblings and their delivery of the text, combined with their physicality, is impressive. Ponsonby does particularly well when it comes to her character’s eventual remorse and fear, while James excels as Giovanni moves from “unsteady youth” to avenging madman. Maximelien Seweryn’s Soranzo and his servant, Will Alexander’s Vasques, make a virile team. Smaller female roles, increased in importance, make the big difference in this particular production. Annabella’s servant, played by Nicola Sanderson, becomes a key role as a foil to the tragedy. Ruth Everett is superb as Soranzo’s spurned lover, an appropriately overblown performance that includes a masterclass in moans.

With Cheek By Jowl on board, the play becomes strangely sexy. Tableaux that summarise Ford’s world view, and make a virtue of unsubtlety, make for startling theatre. The production is frank and brutal. It creates a real sense of the danger surrounding lust. There are moments of excess (I am not sure a stripper was called for) but this is another fine production from master theatremakers. With a clear, boldly abbreviated text, it’s precisely directed and full of memorable imagery.

Written 13 April 2014 for The London Magazine 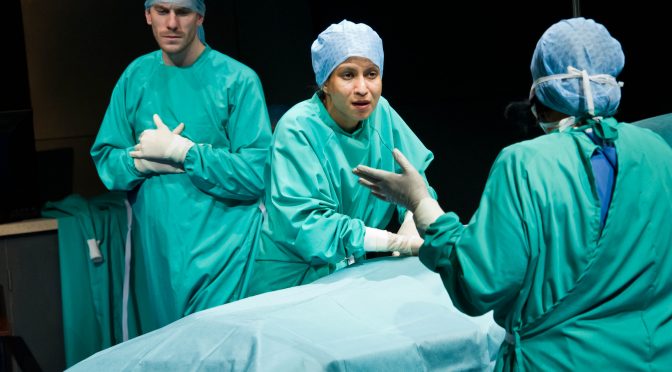 Having a playwright direct their own work might set off sirens – their proximity to the text risks a self-indulgent treatment. But it is a false alarm at the Hampstead Theatre, where Nina Raine faultlessly breathes life into Tiger Country. The vision she has for her work has proved contagious, transforming the auditorium and empowering an ensemble cast to perform superbly.

Raine is known for her extensive research. She spent three months with doctors and nurses to prepare for this new play about the NHS. The politics are subtle, the drama of surgery intense, and the focus is the impact the job has on its practitioners.

Emily, a just qualified Senior House Doctor, encounters expressive dysphasia (‘when you know what to say but you can’t say it’), and not just in her patients. Ruth Everett skilfully portrays this eager intern, on whom the pressure of her decisions starts to weigh physically.

The internal politics of the NHS also take their toll. Vashti, a Registrar, faces the dilemma of giving up her career path when a member of her family is mistreated in the hospital. Thusitha Jayasundera is wonderful in the role. Like many of the surgeons she seems a most unsympathetic character, but her bedside manner reveals a moving, tender side.

The dangers surrounding the doctor’s decisions mean they live in ‘tiger country’ – always on the edge. Pip Carter and Henry Lloyd-Hughes show this tension admirably. With an eye to class, and an obsession with hierarchy, these medics are forced to role play and sometimes behave like animals; it’s a fight for them to retain their humanity and a sense of gratitude for life.

Raine’s script in infinitely richer that your average hospital drama. Her insights make the play a rare beast indeed – informative. Yet it is the lives of these well-drawn characters from which the drama radiates. There’s enough sex and death here for any soap. This is Casualty on steroids. Alongside its other admirable qualities, Tiger Country is hugely entertaining.

Written 20 January 2011 for The London Magazine