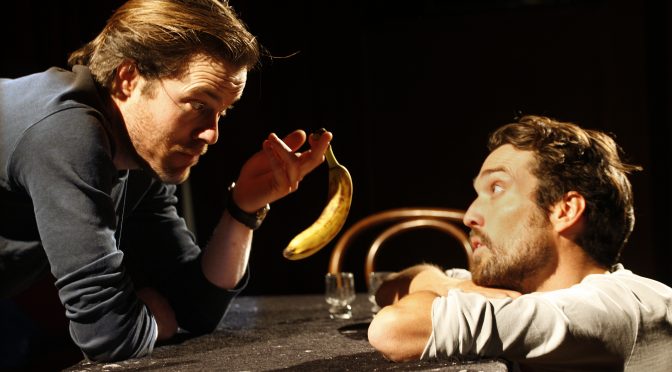 Acclaimed American playwright Theresa Rebeck is a name London theatregoers should know better. Receiving its UK premiere, this smart little play, carefully directed by Russell Lucas, is an enticing glimpse of her work.

Backstage on Broadway for an understudy rehearsal, we meet “working actor” Harry (Samuel John) vainly hoping to take over from an action movie star seeking credibility (a well-cast Leonard Sillevis). And, trying to get some work done, there’s the long-suffering stage manager, played with a convincing edge by Emma Taylor.

The jokes about actors are good, while a developing mutual admiration is even funnier than the players’ initial antagonism. And there are laughs about audiences, too, creating a nice sense of complicity. The imaginary Kafka classic that’s being staged allows Rebeck to play with pretention in a way that’s clever, fun and nimble.

The show is hampered by the pub noises near by, but Lucas uses the space nicely. Given an existential crisis that includes Equity cards, it’s appropriate that bigger questions are handled lightly; even humour around affectation can be ponderous, and this trap is skilfully avoided. The performances are all professional, technically proficient and thoughtful, if perhaps a little too controlled – the comedy could be stronger. So while this play clearly has the potential to be a riot, here, it’s only very funny.