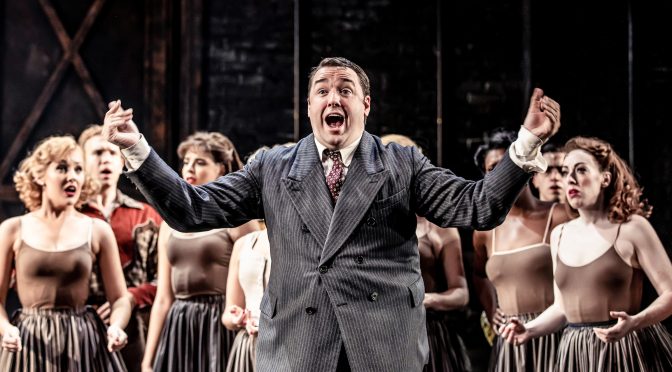 Although this musical comedy by Kander and Ebb – creators of Cabaret and Chicago – is never going to be regarded as their best work it’s still a credible piece, being clever, funny and always entertaining. It’s a spoof of musical theatre itself and of the detective genre, which means there’s a lot going on. Unfortunately, at the unhappy performance I attended, it feels that the content is simply too much for this company to tackle.

At an out-of-town run for a turkey of show called Robbin Hood, the drunken star is killed while taking an underserved bow. And since that death might be the best thing for those onstage and off, the suspects are plentiful. In a nice twist, our detective, Frank Cioffi, is a theatre lover who sets about saving the show as well as solving the crime. Jason Manford takes the sleuthing role and acquits himself well. It’s a shame that there’s too little chemistry with his love interest Niki (played by Leah Barbara West). These are well-written roles that feel neglected by director Paul Foster, who plumps instead for the eye-catching director and producer characters who provide comedy highlights via the performances of Samuel Holmes and Rebecca Lock.

Kander and Ebb don’t make things easy for themselves (or anyone) as Robbin Hood is reworked, and improved before our eyes. It’s an interesting idea for lovers of the genre but needs more pace and more signposting than Foster provides. As Noises Off just down the road shows, when you pretend to be bad you really have to be very good. A delay at the start of my showing created suspicions of problems, then a real scenery malfunction created very much the wrong atmosphere.

Of course, this is just one performance in a long run, and such things happen. But there are other disappointments. Having only seen the show in a fringe production before, I should have found a large-scale version more exciting. Foster doesn’t infuse enough ambition into the piece and the stage seems sparsely populated. Alistair David’s choreography does not help; the dance seems laboured – no matter how well delivered by Alan Burkitt and Emma Caffrey, who do well with their roles as Bobby Pepper and Bambi Bernet – an awful lot of effort for little result. Worse still, Curtains should be a lot funnier: Rupert Holmes’ book builds expertly and the lyrics are smart. For some reason, the composers of the show within the show seem instructed not to even try for a laugh, which means that performances from Andy Coxon and Carley Stenson may sound great but end up – like the production as a whole – flat and disappointing.