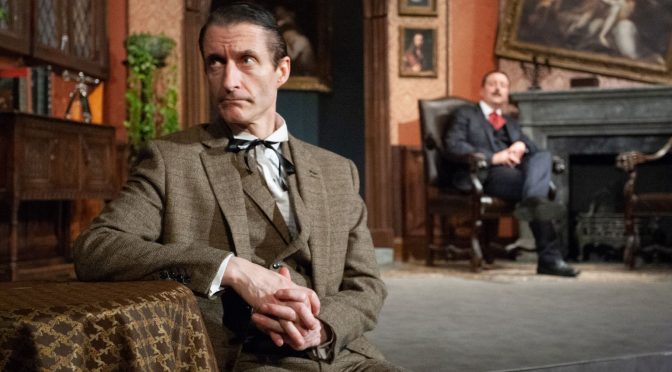 Hiring a venue up the road from a house dedicated to the world’s most famous detective is a good idea when your subject is the same man. If Greg Freeman’s play can tempt just a fraction of the tourists in line for the Sherlock Holmes Museum then this will be a big hit. The target audience is a family one, the aim to explore Holmes as much as deliver a mystery. The result is diverting at times but overall too lightweight.

Seeing the great man on stage is the thrill and there should be few complaints about the casting of Stephen Chance, who does a good job. Now, when it comes to humour and Holmes, I am never a fan. The jokes here are awful and the only excuse – to make the show more family friendly – too obvious. Watson and an Inspector Peacock (too Cluedo) are too bumbling to add any interest. Philip Mansfield and Doug Cooper are fine in the roles but surely with such a small cast a chance to introduce some tension has been missed.

Instead of Watson, the real sidekick is at the centre of the mystery, one Lucy Grendle, who Holmes comes to ‘rescue’. And providing another potentially interesting foil is her enigmatic servant Betty. With both characters, the aim is to provide insight into Holmes’ personality and techniques – fair enough. These scenes are good and Vanessa-Faye Stanley and Imogen Smith acquit themselves well. But both characters are flat; even the well-meaning attempts to flesh them out feel tokenistic, ending up clumsy and simply driving the plot.

The big effort is to save Holmes, our hero, from his despicable Victorian times; the strategy is to dovetail modern concerns about racism, sexism and forms of slavery. Such treatment, though, is far from subtle. In fact, it’s preachy and frequently clumsy – it’s hard to hear people in period costume use the term “primary carer”. Setting aside credibility, the virtue signalling takes up too much time. Far-fetched is fine for Sherlock but the story still needs to be the main thing. While the plot has a nice nod to Conan Doyle’s interest in spiritualism, and some (acknowledged) help from HG Wells, it’s simply too slight to sustain a whole play. Ironically, this invisible thing becomes too transparent in motivation, structure and mystery.