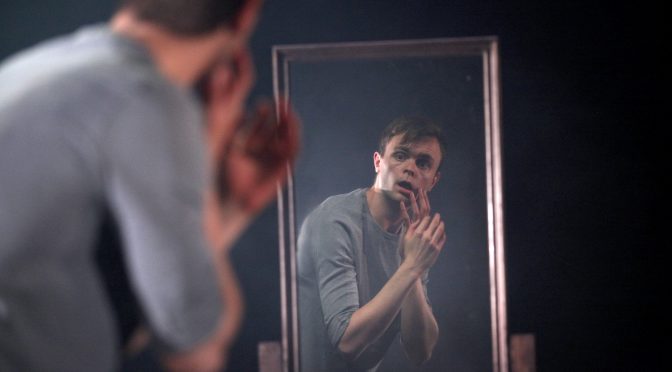 This potted production of Mary Shelley’s tale makes for an entertaining evening. In this somewhat ruthlessly adapted version by Tristan Bernays, the skeleton of the story remains, while casting one performer as both the eponymous doctor and his monster puts flesh on the bones of ideas about their relationship. Adding only simple props – lamps, buckets and a flight case – establishes a strong story-telling feel of considerable charm.

The show is a star vehicle for recent graduate George Fletcher, who plays both creator and creature. We see mostly monster – racing through ‘infancy’ efficaciously with admirable physicality, while creating possibly too much sympathy. He is joined as The Chorus by Rowena Lennon, who takes on some extra speaking roles admirably and even more impressively creates visual and aural echoes of Fletcher’s actions and emotions.

The show comes fromThe Watermill Theatre. Might it have been scarier if its genesis was the atmospheric mid-19th century Wilton’s? The Victorian loved to be spooked, after all. Director Eleanor Rhode brings clarity to weighty questions, but there could be more tension here. Nonetheless, the performances are strong, while excellent effects (light and sound by Lawrence T Doyle and David Gregory) ensure the show impresses, even if it is cerebral rather than creepy.