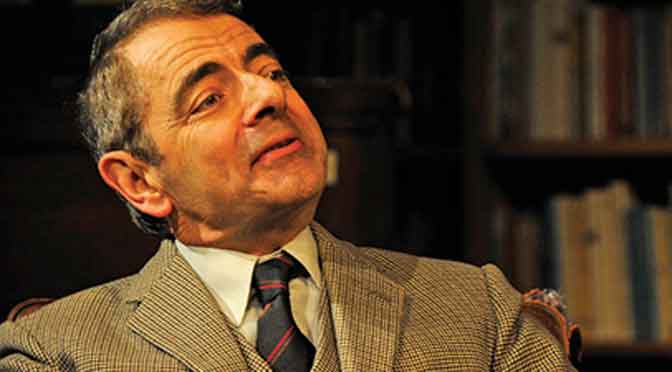 This revival of Simon Gray’s 1981 work, directed by Richard Eyre, marks a return to the stage by Rowan Atkinson. A story of schoolteachers, set in the early 1960s, it has plenty of laughs but is really quite a serious affair. A testing vehicle for its star attraction, it might leave some searching for more Mr Bean, but Atkinson rises well to the challenge.

As St John Quartermaine, long-standing staff member of the Cull-Loomis School of English for Foreigners, Atkinson plays a man blunted by life. The staff-room misfit and an appalling teacher, he’s a likeable nonentity (and, in Atkinson’s hands, sometimes a little too charming?). The problem for Atkinson is how to stop people laughing at him – the urge is almost impulsive – but Gray’s great creation is a strangely blank character that helps to put distance between the actor and his usual personas.

Most impressively, and appropriately, Atkinson appreciates that Quartermaine is a character around whom the action revolves rather than a star turn. His fellow cast members are, to use Quartermaine’s own catchphrase – “terrific”, and this is a strong ensemble piece. Malcolm Sinclair plays the school’s deputy head, a captain of education, with sardonic, steely beneficence. Felicity Montagu is superb as a study in repression and hysteria. And, as her old flame, Conleth Hill gives the real comic turn of the evening, with every gesture getting giggles, as the two flirt over the croquet sticks and lecture notes.

Increasingly “absent” as time goes on, Atkinson manages Quartermaine’s withdrawal with impressive control and intelligence; perfect for a play so concerned with the passage of time. Eyre’s direction has a thoughtful, elegiac quality, mostly arresting but sometimes robbing the play of zest. Yet as the family dramas that have occurred off-stage (they never involve the lonely Quartermaine) come to our attention, both Eyre and his star provide a melancholic sting that’s perfect for the piece.

Written 30 January 2013 for The London Magazine