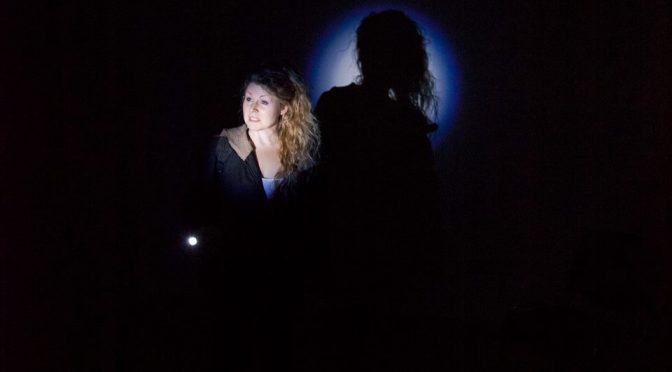 It’s a cliché that ‘resting’ actors work as bar staff and ushers in theatres and, predictably, the National Theatre attracts writers, directors and performers whose work you don’t get to see on its stages – yet. An enterprising group, all of whom work at the NT, have set up their own company to showcase their capabilities, creating the best theatre atmosphere I’ve experienced in a long time.

An evening of five short plays show their efforts so far this year. All are energetically performed and cover an impressive variety of styles and subject matter. Michael Ross’s Preoccupied – a superb treat – mixes the politics of the housing crisis with a supernatural twist so effective it got a scream from more than one audience member. Winning performances from Katherine-Ellen Kotz and Karl Mercer show how pin-sharp Ross’s writing is.

Surrender is a tight two-hander by Aaron Gordon, ably performed by Kate Griffin and Luke Gray, that skillfully juggles humour with a serious topic. A similar mix of jokes and tragedy is combined in Katie-Ann McDonough’s We Grew Up in the Back of a Van; a whimsical take on an Irish childhood, brilliantly performed by Emily Carewe-Jefferies and Charlton O’Connor.

Finlay Bain stars in his own piece, Living A Little, a crowd-pleasing Men Behaving Badly sketch with zombies thrown in! And if you think that’s odd, Jill Davy’s Science Experiment is a sci-fi farce that has Ross Virgo as the only human, while Jill Davy, Laurie Harrington and Katie Overstall perform as various planetary bodies.

Perhaps the strongest pieces were the shorter ones, with less time spent spinning scenarios and more emphasis on powerful themes. But there’s no doubt about the talent here: fine writing, brimming with original ideas and great performances. If talent spotting is your thing, keep in touch with Front of House on Twitter. And be nice to the staff next time you order your interval drinks.