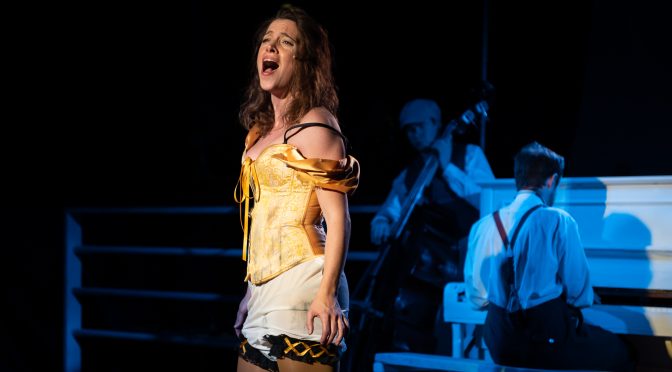 The Ovo Company’s version of Shakespeare’s comedy is set in the 1920s. For a further twist, most of the action takes place on a cruise ship. Both are jolly ideas, but it has to be pointed out the production doesn’t always roar and is not all plain sailing. Yet the show as a whole is diverting and, with just enough clever touches, its strengths are memorable.

Shakespeare has been much more vigorously mauled before now and, doubtless, will be again. The search for parallels in different ages pursued here aren’t unreasonable or uninteresting. But they do feel forced. While director Adam Nichols does well with staging in such a small space, the concepts need smoothing out and the edit is reckless: it’s questionable how much sense either plot or production would make if Twelfth Night weren’t so well known. And some of the characters suffer horribly, notably Feste the fool and Antonio, the devoted Captain, not fitting into the scheme at all. Firmer steering is needed with Anna Franklin’s Lady Toby Belch and Orsino, recast as Captain of the SS Illyria and played by Will Forester. Both characterisations contain too many puzzles and, at times, seem to belong to a different piece.

Moving to happier ground, the love story between Olivia, made into a modern material girl by Emma Watson, and the disguised Viola, depicted with charm and a surprising common touch by Lucy Crick, is funny as well as risqué. There’s a very nice turn from James Douglas as Aguecheek, a not very bright young thing, who does wonderfully well with this limited role. Also strong is Faith Turner who, following the National Theatre’s gender-swapping a couple of years ago, appears as Malvolia rather than Malvolio. With a touch of the blue stocking and plenty of repression, Turner ends up stealing the show.

The production really picks up steam with its music, which Nichols prioritises boldly to great effect. Using cover versions of pop songs, from Rihanna to Lady Gaga, is not new, but here it is employed with frequent wit and – thanks to musical director Tom Cagnoni – the versions themselves are, mostly, superb. The idea really comes into its own with Malvolia’s mistreatment at the end of the play. If anything, Nichols makes this distasteful episode more jarring than ever – which is a problem. But the take on what might be the world’s worst joke, here including a Radiohead song, is undoubtedly effective. The excellent Turner deserves the play’s last line. It will be difficult to see the character again without hearing the song Creep from now on – and that is a peculiarly special achievement.